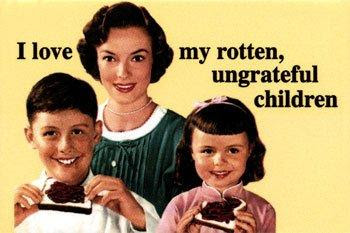 In the Gin House there is me, and two Feckers, Big Fecker and a slightly smaller one. The is an Owen cat as well but he is not involved in this particular grunt.
As a good mum I have a mental calculator. I can calculate when a bedroom will be tidied (when a girlfriend is coming over) and I can also calculate the distance between the teabag sitting on the worktop to its rightful grave in the bin. Three steps to the bin but five steps to where the little, used teabag now sits in its small puddle of teajuice.
I can also calculate the number of shoes that die at the bottom of the stairs and the number of spoons that have taken residence upstairs in lairs that I have not entered since they were 10.
I suppose this is my fault - I forgot to put this rule on the list that clings to the fridge. SEE HERE
But hey, is it worth making a war about it? Am I as rotten as them for not going ape shit about the two million socks that have just appeared in the washing basket? Or should I string them up by their man-bits for leaving another wet towel on the bathroom floor?
Tonight they having a small gathering (read party of the century) so maybe I will just calculate the time it takes me to drive as far away as possible and leave my jam sodden piece of toast that has just done a backflip onto the carpet. I wonder if it will still be there when I get back - go figure.
Writed by Unknown at 9:04 am

Sometimes I make war about the numerous mugs in my daughter's bedroom, and the clothes on her bathroom floor, and the wet towels that she leaves in the living room . . . and sometimes I just sigh and pick up after her.
Has anyone ever figured out why teenagers become so super-slovenly?

btw, I have that card, too!

I gave up being at the front line, Bee, when I realised that no one was going to die from wet towel failure or dirty sock syndrome. I have also recently discovered that you can't die from dust poisoning as well (fantastic!).
They're my Feckers and providing they don't burn the house down tonight I will love them until they don't deserve it!

Aww, you're a good mommy.
I like your house rules.

I KNOW none of it really matters, yet sometimes feel that my son should be just slightly less piggish.

I write that as I watch a dog-hair tumbleweed blows across the floor.

You must have a lot less stress in your life for taking such a patient way about things. I wish I could do that.

Not always a good mum, Mac, but I am allowed to comment on their piggery!

I learned a long time ago, Scarlett, that meeting things head-on only leads to war! I win my battles on a more subtle level!

I really like what you have posted here, it is a very well written and great article that gets right to the point. You could use a little reworking of the blog layout though, but the design is overall very nice. Great job, Thanks!