Master of the dance 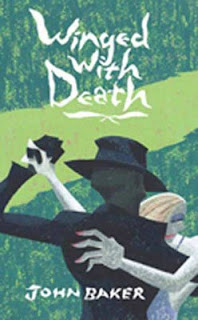 Oh yikes! There it was lying in a heap of newly minted freshness on my doormat. It was late but that made it no less interesting. The request inside said 'for review for John Baker's Virtual Tour' and seeing as today is today I had exactly six days to cogitate and spit out a review of a book that fell into none of my usual reading categories.

I have blogged alongside John Baker for over three years. I admire his dedication to keeping his blog crisp, neat and professional (unlike my own rabid, meandering, often of late, neglected blogspot). I have also admired his dry sense of humour and nifty line in hats! So, who is John Baker and why does he tell me that he has been tangoed?

John is a crime writer and his latest offering - Winged with Death, is simply a great read (so far!). As an 'occasional' writer I am intrigued by the process of writing and how a writer gets down and dirty with his subject. The novel opens in Uruguay, John says...

"I dreamed Uruguay. Or at least I dreamed Montevideo. Just woke up one morning and realised I'd been in Montevideo all night long. Never visited the place in reality. Started writing immediately to get the feeling of the place down on paper."

..and he did. The novel opens with a near penniless Frederick Boyle landing in this heaving nest of intrigue and the prose is a dance in itself, weaving through the hideously censured world of Uruguay in the 70's. The dance fascinated me, I learned a lot as Frederick Boyle evolves into Ramon Bolio and works his way through the process of becoming a Milonguero - a master of the dance.

John surprised me even more by telling me that tango has been part of his life for a while (always write about what you know!). I threw out the image of a Yorkshireman with a rose between his teeth as the author explained that tango is far less saucy than I would like to imagine (he would nevertheless like to have a go with Penelope Cruz if given the chance!).

I am alsmost embarrassed to say that I have not read John before but Winged with Death (I am on page 216) has alerted my reading senses to a genre I vaguely ignored before. Well written, crisp, neat and ultimately a page turner.

"Florencia is sweet and sickening at the same time. She attracts and repels. I find her repulsiveness attractive. She is forbidden territory. I am not allowed her"

As is my want, I asked John some very probing (read 'stupid') questions and in particular one was about his Spanish name, should he ever wish to change. "Pandero de John." he replied, which very simply translates as John Baker. I liked it as much as I like the book and have decided that my own blog name translated could serve me well - 'Moza Descarada Interna'.

Anyway if you are edging on the brink of trying a crime novel I would urge you to give this a go. He's actually quite good!

Hi Kate,
Thanks for letting me in here for the day. Long time now since I was in Cornwall. My maternal grandmother was a Cornish woman, from Mousehole.
I've been to visit a couple of times, but never for long enough. I can virtually smell the sea air.

All you would smell today, John, is smoke - next door are having some kind of bonfire (I was rather hoping that they were cremating the dog, it keeps me awake in the mornings).

And I'm not Cornish - I was deported from mainland England at 15. I can't make pasties and I don't have a weird accent!

Congrats on the book - you're quite good you know (heh).

OK, you're not from Cornwall, but you're a link. It's a Cornish day for me today. I've just returned from Leeds where I saw Knee High Theatre Company's (They're from Cornwall, too) production of Don John. Was really looking forward to it; but in spite of enormous energy expended by the cast, it was dismal.
I'm glad you liked Winged with Death, especially because yours is the first official review.

I have my own copy of Winged with Death sitting here waiting for me and this has whetted my appetite even more.

Oh and don't believe her, John. She so does have an accent ...

I've never been to Spain. But I totally like the music!!

What a shame, John, Kneehigh are usually fairly good!

Debi,I see that you are not hosting John's tour until next month - how did I end up being 1st?
And I soooooo do not have an accent - your accent on the other hand.....

Then read the book, Jannie, you won't be disappointed.

Minxy, I am relieved to find you are keeping busy here, just left a msg. on FB, alarmed by the silence there:) as you are not one to go gentle that good night:) Hugs, hope all is well.

I am well, Bea, and doing a bit of living. It is good for the soul!

I don't know why some people go first. Often it's alphabetical, like I was always first or second on the register at school because my name starts with B. Perhaps you were the first one to answer my query about the tour, Minx. Or maybe it was something to do with your accent . . .

My non-accent gets me in so much trouble!