This is a short fiction from a while back, posted because I met another 'Lily' yesterday... 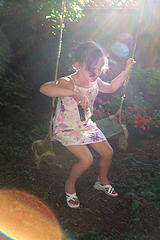 In later years Lily would say that her legs looked like two pieces of string, dangling down from a dress that was too inadequate for the weather. At the time the legs didn’t notice and continued hanging loosely from the swing that she had not quite grown into, and probably never would.
The adults were whispering again, standing in the kitchen making those large-mouthed silent words in the hopes that she wouldn’t understand. They were also drinking grainy coffee and smoking the fags that made Julie, from next door, sound like Marge Simpson’s sister. Julie only appeared when there was oh-my-God trouble.

Lily stretched out her toe with every swing, trying to reach the stone that was embedded in the middle of the worn patch of grass below her. She knew that if she caught that iceberg rock it would mean blood. Blood, a plaster and a certain hanky produced from a pocket of mentholated sweets.
“You never cry. Brave girl.” grandma said once, dabbing at the nailess horror that appeared from under the bloodied white sock.
“I am saving them.” Lily said “Someone else needs them more than me”.
“You’re an odd one.” grandma said, with a sort of smile “You need a brother or sister, you spend too much time on your own.”

Grandma was funny, but a brother, or sister, would be nice. Lily dreamed of having a 'Stella' of her own, or an 'Alice', or even a 'heaven-forbid-a-Michael'. Someone who could share her days and someone to keep her company behind the sofa when the shouting got louder than the television.
A 'Stella' would be round and plump and look like aunty Mary’s fat Louise. Mum said that fat Louise had a head that was too big for her body but that she would grow into it. Lily didn’t quite understand, but she liked Louise's biscuit stuffed cheeks and the little girl was always smiling. That would be nice.

An 'Alice' would read her stories. Lily liked stories. They took you to other places and let you play around without getting dirty. Mum fussed about the dirt, and bloody socks and messy books. Lily knew that she couldn’t have an older sister. That would be silly, but an 'Alice' would be a clever thing and she would be able to reach those books that Lily wasn’t supposed to touch. Alice would be smarter than a smart thing, unlike heaven-forbid-a-Michael, who would, in fact, be thicker than shit.

Mum said that all men were thicker than shit, but that was before dad had broken her jaw again, because up until today mum hadn’t said much at all.

“And now it will be much better.” mum said, while the kitchen gang smoked another fag.

Lily had listened to the words that removed dad, the shouting and the broken body bits from her life, but the only words that counted were the ones that had stolen the dream.
Now there was never going to be a Stella, or an Alice, or heaven-forbid-a-Michael. It would always be just her.
.
Just Lily.

I dont know what to say!

A story that is more based in fact than it should be, Bullets. I do have a sober side.

No need for words, John G, just an awareness that there are children living with violence all over the world.

This is sad as written, but to know you've met another...makes it even sadder.

Blessed be that you exist to make a difference.

Don't be sad, Roberta, I was trying to show that the 'Lily's' of this world are often affected by broken dreams, rather than the violence they live with. She will dream again.

Hi Minx. Am visiting from Pengelly Pastimes who has you posted up as a 'Very Worthwhile Read'.
Really beautifully written. And I absolutely love your blog header picture!

Hi, Tara of the Rusk, lovely words, thank you.

Always striving for the perfection of words, Babs.

Beautiful - through the eyes of a child. And you're right to say she'll dream again. There should always be hope.

Hope keeps us dreaming, Debi. I am dreaming now...

I haven't had time (will i ever have time of my own again) to read your lovely story ... i can always use a dose of hope!

However, I did want to help you out with your Schleppin' Wardrobe.

So, luv, head over here. I hope this answers your fetlock wear dilemmas!