The dressing up box

I went to a party last night. My sweet friend Karin had hit the big five-oh and was celebrating with a fancy dress party with the theme of 'F'. Staying true to my nature, and the fact that I probably had enough kit lying around the house, I decided on a 'fallen fairy'.

Yesterday afternoon I made an excursion up to the attic to retrieve some black wings and a raggy skirt. Just as I was fishing around I spotted a box that hasn't been opened for a long time. Inside there was a collection of clothes that I used to wear years ago, clothes that meant a lot and I couldn't be parted from.
At the bottom was a beloved dress that brought me to tears. It was an original fifties dress that was once my mum's and I think I last wore it when I was about nineteen or twenty. I tried it on.

Not only did it fit but I couldn't take it off again, so with the addition of matching vintage shoes, gloves, and a kelly bag, I backcombed my hair into a modest beehive and then shocked the Feckers into stunned silence!

"Women should dress like that all the time." Big Fecker said.

I should have argued for the rights of the emancipated woman but I tend to agree with him. When did being a bright, intelligent, strong woman mean that you have to wear ugly clothes? My only problem would be the hour it took to get my eyeliner right!

And yes, the party was great and I kept company with some fish fingers, flamenco dancers, a couple of dodgy 'fathers', other fifties, forties and flower powers and a friend who after a few drinks kept falling out of her 'femme fatale' dress. Twas an effing good night! 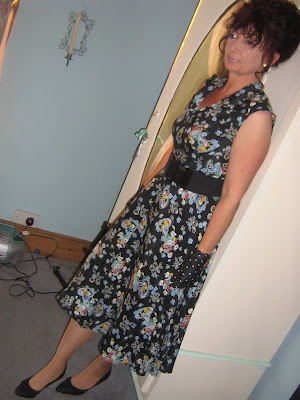 (So shocked by his mother's appearance, Little Fecker forgets where 'up' is on the camera) 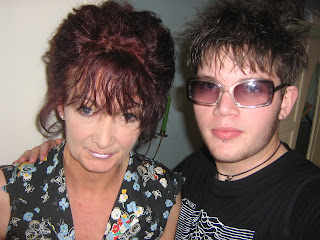 (Big Fecker, if you don't take those ridiculous glasses off I am going to stab you with one of the twenty-eight kirby pins that are holding my hair up)

Soub, your fancy with my fiftieth frivolities leaves me in a frenzy. My off-blog partying friends may not want to fix your fascination - I shall find out...

What a beautiful dress! I bet that would fetch a fortune (not that you'd ever sell it, of course.)

Isn't it, Elaine? It's cotton silk with a single net underskirt. I felt very feminine and had to sit 'properly' all night. And no, I would never, ever sell it. Just a shame I have no daughters.

Thank you as well, Marie. My mum was very stylish.

Minx, I have turned green..with envy:)
You actually put on a dress last worn when you were twenty... and it actually fits?!!! You are absolutely gorgeous! Now hold tight onto that dress, because sure someone out there is already trying to pull it off!:)

Wow, what a beautiful dress! Keeping things like that are lovely treasures to come back across at a later stage! Good for you and glad you enjoyed the F party :)

Oh, blushing a bit now, Wordcrafter.
I dint notice anyone trying to yank me dress off though - does this happen a lot in London?

None of that, FB, I was very prim and properlike.

OOOhhh -La-La
My heart is in my throat.
i'm gonna start callin' you "slim"!

Holy smokes! Lookin' Fabulous. So glad you had a fun night. I'm still in my twenties and couldn't pull off a dress like that. Yowza!

Phwarrrr! As they said in the seventies

You can call me what you like, Bullets, but you might struggle with 'tall and lanky'. Both the Feckers are taller than me!

Yes you could, Hoodie, smoke, mirrors and a girdle!

You look tres magnifique in your vintage look, Minx! It is definitely back in full swing.
Excuse the pun; wasn't intended. Women are tired of wearing business suits to prove their eqaulity. They can be influential and feminine at the same time!
Here's to you!

You know, I now have time to look at these pictures of you with your vintage dress, and I have to say Kate...you look marvelous. No "F's" in it but I think this warrants a more specific compliment. It's time for you to realize that you are a knockout!

Now put on the dress, heels and even the gloves and go out somewhere and "show 'em what ya got!"

Kate you are a gorgeous woman. Flant it for God's sake!

AND I'M NOT A LESBIAN!

Sorry, just need to cover all the bases. :^D

now if you come across any vintage red cowboy boots, i need 2 pair for my 4 dainty size 16 mulish feet ....

You lot are so funny - I'm pissing my pants here. I don't bat for the other team either but I think you two may have convinced me!

Somewhere, at the back of my tiny female brain, I did think this post may have stirred up some strong feelings about women compromising their femininity - fuck, I get it so wrong sometimes!

Thanks, Abso, and yes, the rest of the crew are up on Facebook (FB - useful for something after all).

i'm Lesbain. Mi got dress up boxe.
And two foot two.
God, its fun being dumb.

Here's a game for you, Bullets, all the lesbains are playing it....

...fling her about a bit and you'll soon be feeling more intelligent!

I'm not any kind of les bean, Bullets, but I sort of like throwing bubble girl around in a gentle, non-sexual way. You can also squeeze her through teeny-weeny little gaps between the bubbles!
I do have a life, btw!