One in a short series looking at the stories behind some of our great works of art.
The Night of the Long Pea Shooter - by Rembrandt, 1642 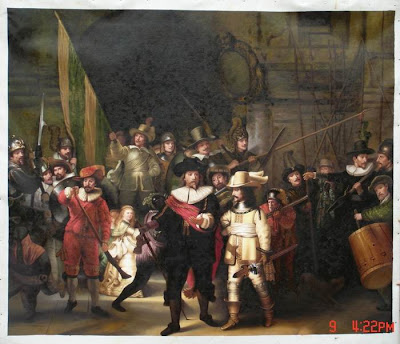 Although often referred to as a 'night' scene, it is obvious (note the giveaway digital clock in the corner) that Rembrandt painted this just around tea time.
His painting of Captain Frans Banning Cocq (painters were not very imaginative with their names in those days) and his stylish sidekick, depicts not only the dawn of the innovative long range pea shooter but also captures a moment in time when the cummerbund could not decide where it was supposed to be.
This disparate scene shows the supporters and dissenters of the newly introduced 'Dutchy' pea shooter. Rembrandt shows us that the fashion conscious have embraced this new weaponry but has not forgotten to remind us of the 'stick-in-the-canals' to the left who are fiercely holding on to their pointy sticks.
An early version of camouflage is shown with the 'dutchy' roughly draped in a pair of curtains (the man in green has co-ordinated perfectly). We are also shown that ignorance was rife - note the man in red trying to wedge his peas down the barrel of his gun.
To the right, Rembrandt shows us the evolution of the mobile pea barrel and also the forerunner to an army uniform dress code, although only the use of identical moustaches can be detected.

History is alive and peashooting from the hip!

I think you should stay away from that surrealist site. Or alternatively move in there permanently.

Wend you not to wreak annihilable havoc with my tumefascent transmitters and turgid devices.

When was it that the lentil shooter came into vogue?

I came across your blog today expecting to just 'move on' after a few seconds, as I usually do. But I scrolled down the page and ended up reading every entry from present day to June 15th. Not bad, eh? I would have carried on but feared I was hitting your 30 minute deadline.

Mad, completely mad, I tell you!

Thank you for the explanation. it all makes obvious sense now. One thing, what is that figure in the lower left hand corner? It almost looks like a penis in a turtleneck???

Exactly, Babs, everyone should have their say about a subject that they love whether they are right or just missing the truth by a whisker!

I got so addicted to that surrealist server site, Debi, that I am making up my own now...

"Your eyes cannot hold a blow torch to the pygmalion countenance of your verbose hemline".

And I would welcome your erudite thoughts on 'The Night of the Long Pea shooter'.

That was a little later, Leslie. After all that trouble with the Spudlock, they found new ways with the split peas and the Lentilian Longshot came into being about 11am just after a very nice cup of coffee.

Welcome, Miss Understood, and a fellow 'dumpling' I see! Well done for your grit and determination - not sure I would have read that much of 'me' in one go!

Thanks, John G, one tries.

You are, of course, correct, HM. Rembrandt is alluding to the turtleness in all men and the fact that all turtles are quite a lot smaller in real life!

What about 'dude with the big chrome Phalanx? Were youe able top trade you bludgeoning/cutting weaponry for updated peashooters?

My Friend UF Mike does this sort of thing using material from the Museum for Bad Art....
http://www.museumofbadart.org/

Bullets, the 'dude' was one of the earliest depictions of a 'Terminator' known to man. His phalanx was in fact a semi-automatic Superpea 8, otherwise known as 'swee pea'.

That is extremely bad art btw.

hahaha! Very clever indeed, Minx! The muse comes at as from all directions; to follow or not to follow, that is the question? I say run with it!

SO WHO IS THE CHICKIE IN THE LIMELIGHT?
IS SHE AN ANGEL?
OR SOME KIND OF PEASHOOTER GROUPIE?
OR A FRENCH HORN...
(there really is a lot here, reminds me of one of Dads cigar boxes))

What surrealist site? Where is it? I want to go there right now!

I never run anywhere, Petra, and certainly never after that bloody muse!

Don't be silly, Bullets,Rembrandt has displayed the traditional emblem of the Arquebusiers in the painting in a natural way: the girl in yellow dress in the foreground is carrying the main symbols. She is a kind of mascot herself: the claws of a dead chicken on her belt represent the clauweniers (arquebusiers); the pistol behind the chicken stands for 'clover'; and, she is holding the militia's goblet. The man in front of her is wearing a helmet with an oak leaf, a traditional motif of the Arquebusiers. The dead chicken is also meant to represent a defeated adversary. The colour yellow is often associated with victory and you can almost hear her battle cry "Load yer peas, lads, we're gonna sting their asses tonight!"

Oh keep up, Babs - here's the link to The Surrealist Compliment Generator from the comments on the last post....

I like it when Rembrandt did the theme tune to Friends...

Jon, I have to correct you a little here because the theme to friends was done by Rembrandt (Harmenszoon van Rijn) and his younger brother brother Steve. Being older, a painter type and obviously more famous, Rembrandt, insisted that they were known as 'The Rembrandts'.

In later years he also branched out into toothpaste.

oh, I get it.
Its Margaret Thatcher!

well, being a cute puppy girl, i wouldn't know very much about pea shooters ....

Do you know, Bullets, I think you may be right. Apart from the lack of the mad red glint in her eye, this indeed could be an early picture of the dictator Margaret Thatcher.

Hmm, how does one describe a pea shooter, Lola, without descending into sexual innuendo?
An interesting device, used in more modern times by men and boys in shorts, to sneak up on their enemies and blow a pea at them. Thank goodness women never got involved in warfare - there might be frying pans and everything!

I wish I'd been educated like this at school!!
Thanyou Minx!

All self taught, Jan!!

Finally - a serious historical note at last!! You have greatly elucidated my understanding of Rembrabdt!!

I knew you would appreciate my tireless efforts to educate the masses, Muts!

She died, FB, get over it - 'Feeling a bit Doris day' is here to stay

I think boy doggies do something similar .... only they tend to aim their peas at fire hydrants and telephone poles and Bad Men's trousers ...

I don't want to think about 'bad men's trousers', Lola!