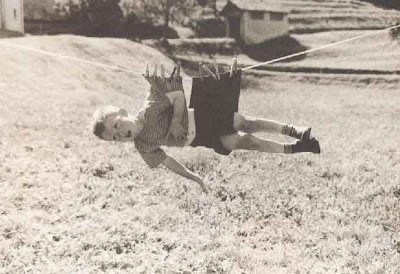 We need to talk about Kevin.

Thank you Mommy for not putting me in the dryer again.

This is what happens when you tell your sons to do their own washing.

Why's my left leg shorter than the right leg?

We should have called him Peggy.

hahahah. i'm just laughing not captioning. but i will have to say that my stepdad regularly threatened to pin me up by my ears in the barn .... this seems like such a softer, more benign way to go .....

My dad used to threaten to 'wipe that smile' off my face. It used to puzzle me, but I was always waiting for the wind to change so that I could stay like that.

'Box my ears' was another expression that confused me. Ears? Boxes? What?

When you sister babysits...

Mommy, I promise I won't do that again...

Didn't everybody of a certain vintage only ever have one set of clothes?
I used to get about in my singlet tucked into my undies waiting for them to dry. Now I have too many clothes and I rather be caught naked than wearing a singlet tucked into undies.

I think you are being a little singlet minded here, Noony. A vest tucked into ones undies can look extremely attractive!

Just to clarify clearly I was not captioning, but commenting.

Brain perpetually sleeping, didn't even catch that captioning was the sort of comment being sought. Just assumed your title was some over my head word play. I don't know if now I should feel better, or worse? (please do not tell me it was both). No matter. Brain ZZZzzzzzz....

This is the result of his sister and her friends nipping into Papas moonshine.

Tis far better to hang a lad by a peg, than to wring him like a trouser's leg. :)

The development of a photographer's son.

OK, let me down, I do love the hand-me-downs!

He wasn't really that wet.

Mummy, dearest, um, look, when daddy said he was going to 'hang me out to dry' over that very unfortunate incident, well, um, I don't actually think he meant it quite so literally, if I can be so bold, you know, like I don't think it really meant he wanted to actually 'hang me out to dry', um, so I'm thinking it's probably more of an expression to do with leaving me to sort things out on my own, you know, like, he's not going to help me? Mummy? Dearest?

Little Timmy was pondering the unbearable lightness of being...

Yay, nice one, Muts, and Shameless gets the prize for 'most rambling caption'.

Yep - Mutley gets the Oscar. Shameless makes the speech.

The rest of us hit the bar.

Someone beat me to the obvious "He was hung out to dry". How about "He was pegged for the part of Superman in the school play." Okay, maybe my brain is tired to come up with anything more clever
. I need more chocolate.