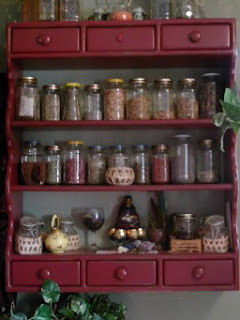 My enforced rest has led to desperation for something to do that doesn't require much movement (I can still get chocolate in my mouth which is something). Today I decided to sort out all my writing files on my computer and on my pen drives (stick thingies).
I have always thought of my writing files as being akin to a larder, but have I realised that it goes much deeper than that and probably takes up a whole kitchen.
.
In the larder there are ten novels, six of which are finished and four that are at first draft stage. I suppose those four should be in the washing machine, ready then to go through the mangle and on to the tumble drier at some point. Ironing comes later!
.
My short stories have already sorted themselves into various jars labelled with things like 'complete tosh', 'wouldn't bother with this, you were on drugs when you wrote this' and a couple called 'maybe, possibly' and 'if you get your finger out of yer ass there maybe something here'. How I ever manage to sort anything out I don't know. I found one on a pen drive called 'Kate, you're a twat' but in looking at it again I think there may be some potential there. Hmmm.
.
The trouble is that I can't chuck anything out. There are at least twenty poems in the fridge, cooling their heels, ready to be shaped into something that might eventually resemble something readable.
.
I very rarely work on one thing at a time, so there is a line of pieces that are waiting to go into the food processor, mixed together, churned up, to produce something new. There are four projects busily simmering away on the range, a novel, a short story and a couple of poems, being stirred daily and added to. This cauldron is rarely cold and there is always something to do to them.
.
Then of course, there's the microwave. I suppose all my blog posts come from here. Wayward thoughts that get zapped quickly and thrown out to the world (well, not recently).
The only thing my kitchen is missing is a bin. I suppose it would be a useful addition but then, what would I do with all the leftovers that I recycle?
.
Please share your methods. It would nice to know that I'm not completely insane.
.
Writed by Unknown at 2:16 pm

"It would nice to know i'm not completely insane"

Thanks Skint, knew I could rely on you.

It made me feel quite hungry but then again I love extended metaphors...grilled in a little butter. On the same basis my kitchen looks like a loonatic had a fit in it about ten years ago then cleared off...

Well bearing in mind that you told me recently that insanity was essential I'll just ignore that bit. I love the metaphor with the kitchen and it doesn't need a bin does it because everything in your kitchen is useful.

No apologies John G, you both pop over here so I am assuming that you need a dose of insanity from time to time.

Mutley, tidy kitchens are for people with nothing better to do. I am with the loony.
And V, never made any excuses for my particular brand of 'normal'. And yes, I am more green than I thought. Anyone got any spare jam jars?

Btw, just found another file in the novel department, labelled
'IMPORTANT - never let anyone see this, ever, never, ever' - it was my first attempt at a novel! Bless.

Skint and John G just sneaked in and nicked my comment from the microwave. No fair.

My humour is in the toaster at the moment, only popping up every now and again. Thank goodness for friends like you lot - where would I be without you?

I am quite getting in to this - I am off to spread something with jam...

On my computer I have writing files of two novels, research, poetry, song lyrics and a rock opera. Also a file in which any new ideas can be recorded as well as one I use to write blog entries. Older writing has beeen removed and stored away on discs.

Nothing wrong with being insane.

I'm afraid I'm still at the biro on foolscap kept in a shoebox (preferably Converse Allstar)- even though I'm against designer labels. Usual middle class contradiction
As is painfully obvious - am not remotely technical.

A belated get well soon. Pain is a world I inhabited quite recently and I'm sorry you had to go there too. It did make me realise that I take health for granted. I felt I learnt something. Even if it was crisis management of family life. A time of enforced and ultimately beneficial reflection. X

Minx you would be horrified with my own setup! I won't even go there. This was interesting though, and insanity is ESSENTIAL

I am too old to be horrified by anything, Shameless. My boss raises an (unplucked) eyebrow at the labels on my files at work. Luckily for me she is a complete technotwat so she will not find all me lovely handmade shoe sites.

How writers do things fascinates me. I am also fascinated to know that some people write their posts out before transferring them to the blog. I must be extremely lazy - well, yes, I am, goes without saying, but why do you write something out twice?
Insane? You know it is.

Meloney, still in the P world but have just returned from having needles stuck in me that a chunky jumper would be proud of. I was just suprised that I didn't see them coming out the other side.
My bum is sore!

Then there's the 'I threw this together for dinner, wot d'you fink' type of writing.

Comes from having a well stocked larder cupboard... ahem!

Ah Cailleach - this one I understand. What is wrong with salad and gravy?

My bum is still sore.