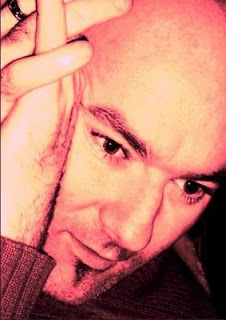 Based in Lyon, Seamus Kearney is a writer, poet, painter, photographer and pianist (yeh, one of those talenty people). He blogs HERE and today he is pinky purple!
.

1) Why did you start blogging?


I started blogging to connect with other creative writers living a similar isolated existence. It's also a little bit of self-promotion I suppose; one never knows who might be reading (hence the name Shameless) but that is so way down the list now. (heh - you came out!)


When I receive more than three death threats in one day or when I am too busy doing book signing tours around the world, darling! :) (of course)

3) What is you favourite kind of post to write?


I love writing something that is surprising and funny, but once you've fired them all off they are in short supply! (yours don't seem to be)

4) Give some examples of the diverse range of links on your blogs (lit, arty, funny, stupid etc) – what do you mean they're not diverse?


Most of my links are connected to writing, but they are diverse in terms of age, published/unpublished, race, location, gender, eccentric/straight-laced, experimental/traditional. (straight-laced, that would be me then!)

5) You can have five bloggers over for tea and cakes – who would you choose?


You Minxy, Debi Alper, L.M. Noonan, Kay (As It Happens) and Cate Sweeney.

7) What colour underwear are you wearing? 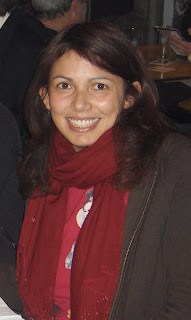 This foxy chick is Verilion - she wanders about a bit in Paris and blogs HERE about writing and her mad life in various parts of the globe!
.
1.Why did you start blogging?
Eh I was going to write collaboratively with a friend, so I decided to set up a blog so that we could do that but it never got off the ground and there was this empty blog... so I eventually I just shoved things up there.
.
2.When will you stop?
Eh ... why do you want me to? ( ;
.
3.What is your favourite kind of post to write?
Yikes. The ones that just seem to pour out and get the most comments (it’s not to massage my own ego honestly!)
.
4.Give some examples of the diverse range of links on your blogs (lit, arty, funny, stupid etc) – what do you mean they're not diverse?
Well there are loads of writery blogs of some sort. There are some funny ones like The DailyNooz, Confusious Trevakis, Angriest Man etc. There’s the couple who have set up the book shop and recently I discovered Apprentice the photographer (and bloody good writer), I sland Monkey isn’t so regular but he’s quite artsy and thoughtful.
.
5.You can have five bloggers over for tea and cakes – who would you choose?
ONLY FIVE! You of course Minx, Shameless, Nikki and Mark (they only count as one because they both blog on Mostly Books) so I could pick their brains about setting up a book shop, ah... Apprentice (at My Gap Year) and Atyllah so she can show me how to teleport! But if we wore big skirts (even though that is a rare occurance in my neck of the woods) maybe we could sneak in quite a few more.
.
6.You have the power to blow up one blog – who?
Now I’m not being all saintly or anything, but if I don’t like the blog I don’t read it, so I don’t know. But as I have the power I would look for someone who was hateful and using the internet to spread xenophobic evil messages and blow them up so that we couldn’t even happen upon that blog by accident. Do you think Dubya has a blog? (very apt answer considering yesterdays post)

7.What colour underwear are you wearing?
Lilac (french of course?)


(This first bank of 'interviews' are with bloggers who I first connected with last year - I will be stalking the rest as time goes on!)
Writed by Unknown at 8:25 am

As for Shameless, I still haven't recovered from finding out he's not covered with fur ...

She's rare (a Cornish expression for outstandingly fit)....and you too Seamus, of course.

Gosh, my photo all blown up, Minx!
It's an honour to have my profile alongside Miss V's, as the nearly French! :) Also, I'm glad you think that we are BOTH rare! :) Am I the only one (along with V, kind of) who named a blog to blow up? I feel bad now. Can I say smudge, instead of blow up? And for those who like Miss Snark, and who are about to send me vicious mail, can I just say this: she is annoying in that she is often right, and she is often right when she is being annoying! I agree with the blogger who said that she comes across as someone who enjoys being mean and snarky in a position of power (apparently). But hey, some people seem to go for that ... so, I say: live and let live! :) That's me making a bad attempt at back peddling.
I've enjoyed reading the other profiles, Minx, and look forward to reading some more! :)

Don't be such a chickenshit, Shameless, just blow her up and be done with it!
It is not so much her blog that I would blow up, but the endless stream of numpties that comment there.

And don't worry there are a queue of blog terrorists coming along behind you!

Oh god now I'm all embarrassed, but I still want to know why you thought Shameless was covered in fur Debi. Or am I being dense? And Shameless I agree with Minx, just blow up and be done with it. I'm desperately trying not to do some work that I know I should be doing, so I'm looking for any distraction possible. Blowing up blogs seems like good fun at the mo!

Me too V, just got to a chapter that doesn't know what it wants to do yet. I lost patience with it and will leave it to stew in its own juices until it decides to be more co-operative!

Who shall we hit first?

V - I was convinced that Shameless and his cat Muffin were one and the same. Didn't you see that pic of him (which one?) sitting at the computer a while back?

I am more than a little worried now, Debi.
Forgot to tell you that the house is full in the summer. No visitors from London - so sorry. Yes, booked up I'm afraid until 2050. I had to give preference to people who can tell the difference between a cat and a pink Kiwi!
Nevermind - try Scotland.

Oh, yeah, push the detonator button ... yipppppeeeeee!
My conscience is CLEANNNNNNNNNNNNNN now that you have resolved me, Minx. And anyway, what a waste of time blaming a cat for anything? Unless it's Dorcas's cat! :)

" The Shameful one might benefit from a hex, or two, Dorcas Fleming." said Zebulonus "He fails to understand who is actually in control in a human/cat relationship."

"I would not waste my time with such a triviality" Dorcas said, adding wormwood to the brew of absinthe "Muffin knows, and that is all that matters."

Hey have you been blowing things up and celebrating too much while I've been doing boring things? Debi I remember Muffin very well, but mmm... well never mind. Oh and to answer your question Minx, Marks & Spencer's finest, contrary to popular belief French underwear is over priced and bloody uncomfortable. See I've spent too much time in front of a computer today and am fixating again.

Thank you for putting us right about the damn frenchies and their uncomfortable underthings. I also purchase me drawers from M&S.

I object! He wasn't a pink kiwi at that point. He was a tantalising anonymeme. (Good word, huh? Should I copyright it?)

Ah, to go back to the tantalising anonymous one. Oh well, pink Kiwi is probably more fun! :)
And I say hear hear to V about French underwear. The stitching always seems to be hard with fish wire that cuts into me thighs!
And that Dorcas, she is my kind of witch!