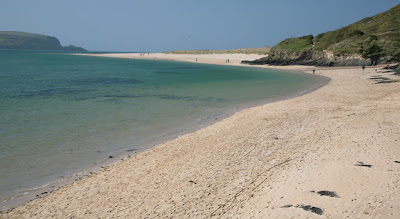 Rock Beach. Absolutely awful.
It ought to be ashamed of itself - failing miserably to attract a glut of beach umbrellas, deckchairs and screaming children. I blame the golden sand and bluey-green sea. This beach thinks it's somewhere foreign rather than hanging off the end of England - stupid beach.

come on minx, is this sinful enough? take a look at this one instead. hades will shun it.

Ugh, disgustin'. Look, not a fairground, or bucket and spade anywhere to be seen. A failure of a beach.
Thank you for pointing it out Canterbury Soul - another one to avoid!

Is this all you could muster up in response???? I bet the water is freezing. Try this for size:
http://www.tropicalisland.de/south_africa_cape_town_peninsula.html
And these are the chillier beaches. You ain't seen the natal ones. They're stunning. Especially the South Coast.

Who'd've thought it? Of all the things that could possibly divide us ... it's the beaches we come up with.

Can I make you all spit at me by saying that they are all individual beaches and each have their own positive attributes and should be respected?

No, no Debi, I appreciate beaches of all shapes and sizes - I just prefer less busy ones with no sharks in the water!

There doesn't seem to be any debris from nearby wrecks, not a single crate of trainers or bottle of face cream,let alone any BMW steering wheels. What do the people do for fun??

I REALLY thought that was Thailand!

The Cornish are far more efficient than your Bridport crew, Mutley - it's in the blood. They would have salvaged the salvage before it even became salvage!

I know Shameless, beautiful, no? I need to remind myself sometimes of how lucky I am.

Ah,teenage memories; my father's friend had a cottage at Sea Mills, on the other side of the estuary from Rock, so for several years, we holidayed there. But most memorable, aged seventeen, I think, five weeks in the summer. My best friend and I, with a sailing boat, living by the tides, often close to drowning, evenings in the pub at Rock, then across to Padstow in the dark as the tide swelled..
stay in the pub too long, find the boat sitting on the mud.. nothing to do but go back to the pub... sleep on a tilted boat.
A great summer.

Tis not quite the same, Soubriquet, since royalty moved into Rock, and Rick Stein staged a one man takeover of Padstow. But still, very beautiful.
Life's a real beach, John G, preferably without surfboards and killer body boards!

Debi, I've been suitably chastised. I bow out gracefully beaten.

two lessons:
1) Never challenge the Minx, even in jest

2) What's a beach between friends? Especially when one of them currently feels like no less than a beached whale ;)

Saaleha - I've been gobbed on by a beached whale? Can I say I feel honoured (though somewhat damp ...)

Then perhaps I shall come way down south Saaleha, and we can sample your beautiful land like TWO beached whales.
A pregnant woman is the epitomy of hope - don't forget. Revel in your state of glory!

Oh, do come, And bring Debi too. Sorry to have 'dampened' yer morn love ;)
We can braai fresh fish on the beach and maybe throw a mealie or two onto the fire for good measure. Sweet potato tastes wonderful cooked amid hot ashes. But of course it would have to be after the wave comes and rescues the whale.

A friend has just returned from Cape Town - she said it is one of the most beautiful places she has ever been and her photos proved her point.
She was on tour with a cricket team - now if I could just get rid of the cricketers next year.....

I last went to Rock 20 yrs ago, probably more...it's no doubt changed a lot since then. But living 300 miles up north, Cornwall's magic, always will be..