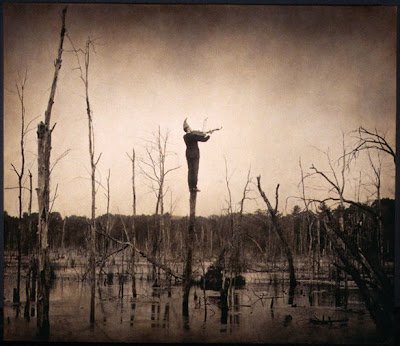 It was not intended to be a joke, but his ramblings were not to be believed. Ramblings that had lost him his wife, son, home and now, almost certainly, his life.

Cold was the water they had pushed in front of him, unpalatable as the grey, dirty rain thudding silently against the bulletproof glass that kept the truth from their ears. He sipped at the re-cycled muck, trying to move the stone that was once again lodged in his chest. Would these people never realise the fatality of ignorance?

"And the trees are telling you this?" sneered a Savile Row pinstripe.

He studied their mean suits and their lying faces, wondering where they kept the velvet blindfolds. Even today they still gave reverent service to the lip, candyfloss words that satisfied the dim, and calmed the bleeding hearted. No one wanted truth to be served on a cold plate.

The rain never stopped now. A constant, miserable echo of life unsupported. As the world came undone, he had fled. There was nowhere to run, nowhere to hide from the man-made holocaust that now squatted on a surprised world . The music had stopped, but for three years he had nurtured these last remaining trees, appointing himself shepherd to a flock whose feet were already beset by the rot of humanity.

Now the earth was audibly crying, a last lament for stupidity, tears for wanton disregard. He picked up his instrument for one last sonata.

"And the trees are telling you this?" sneered a Savile Row pinstripe.

Mean suits ? Huh ?In what sense is a suit mean and come to think about is chatty garrulouness a quality we often discover in a tree..or shrub for that matter.

I know Prince Charles talks to trees but he only says things like " Tell how long have you been a Tulip" They rarely answer back.

I `ll get my coat

PS do you try out your writing here and do you ever try poetry ?

"So Minxy you do not like right wing bloggers because "they" talk a lot of crap eh. Well just so happens that I have what you might call a right wing blog..I wonder if you would care to throw your hat into the ring as you appear to be a Liberal( soi disant)...At the moment its the Death Penalty.
Your treatment of suit wearers is a bit harsh as well isn`t it. I would love to open a pottery in a village or something but meanwhile I need the sovs

Well done for getting your book published its got a catchy title at least...tell me why are West people always into witches and things ,I`ve heard there is a lot of radiation coming out of the rocks and it could account for that midly eccentric streak.

Newmania - Thank you for the indepth summation of my writing, politics, mental state, lifestyle etc (all untrue) - it unfortunately confirmed many things!

Your words as ever have beauty, truth and power and contain so much beyond the immediately obvious to those who know how to read the quiet strength of the symbolism.

Sad, really. But what does one do when the last vestige of the illusion of adequacy slips from one's fingers? One concretises one's thinking, resolves all shades of grey to the purity of black or white, and stills in oneself every whisper that there may be complexities in human intercourse too difficult to judge with complete confidence. Then one starts a right-wing blog. Or sells insurance. Or, if the case is severe enough, both.

No need to be sniffy Minx. I didn’t say anything about your mental state or lifestyle did I ..oh you mean the pottery thing ,well I didn’t think of you ,I had a bank advert cliché in mind . As to your writing I have looked at your other blog and commented favourably with out having to lie like a snake and my remarks here were not intended seriously. I was trying to be funny which has had varied result admittedly. O-pine ..? No? Well I suppose people are going to be sensitive about their crative stuff.. I `m used to a robust exchange of public ideas which “Literature “ has abandoned for the most part.
I see what you mean though, the archetypal Liberal, an arts dabbler in a village in Cornwall. That was not my intention and your writing is interesting. I prefer the one about the crash and the back narratives.


John , hysterical , you confuse the childlike and the infantile , you confuse words and inner life . Try being more concrete and avoid drivelling insipidity in your writing . Lay off the Mills and Boon and go on a course of TS Elliot and Larkin. Ponce.

That’s £5 but the next session is more .

Newmania, thank you, but I am not sure that I am deserving of the attention you are lavishing on this blog.

John, you are as eloquent as ever, but tell me, did you like this piece?

Minx, this piece was evocative and thought provoking - sent a shiver down my spine and the photo exactly caught the mood.

Thank you Meloney. I love Robert ParkeHarrison's work. His photo's have a dreadful melancoly and I have used them for a number of pieces that are flavoured with sadness.I am quite pleased about your spine!

Btw, I loved yer latest trot down the surreal path!

Sorry, I've had connection problems this afternoon, but yes, I did like this piece, very much, and I'd like to see more--there's obviously a much larger story behind it.

I also loved your poem over at Mutley's. Brilliant.

J - You can never keep a good woman confined to a mere 200 words. You know me.

Hmm, yes, I know just how he feels about those last few trees.
Lovely bit of writing, Minx - poignant and evocative.
Loved the phrase "mean suits" - stunning description of a certain type of bourgeois anality.
Now I'm going to put my big wooden spoon away and go and chat to Granny about the dire state of humanity.

Thank you Saaleha, I saw this tree sonata as part of a world wide requiem for the mistakes that goverments are making every day.

Atyllah, I somehow knew that your wooden spoon would find the symbology in this piece. And of course, those trees - close to your heart, I know.

Minx,
This was lovely! It worked perfectly with the image. The mix of words really took me to another place. Very lyrical and dream-like. :)

I was very interested in this - and was surprised by it as well. Its good to change the tone and direction of a blog -keeps us coming back. I am afraid Mr N is not as funny as me - but then again I am not as political as him! If you disagree with him - go and write in HIS blog, at the moment the devil has all the best music blogging wise I am afraid.

Thank you Shameless, your words are valued, as ever.

And the same for you, Mutley. This is a public blog, I put my stuff up, I suppose, with hopes to provoke a response of some sort in the reader. As you know I am not keen on giving a formal critique on a blog, but welcome thoughts, positive and negative, about my own words. Your 'surprise' intrigues me.