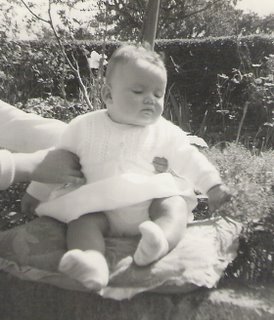 Shameless has called for pictures to explore your inner child.
Well, here's mine - The Miserable Witch!
Taken in September 1963 (I was 7 months old - fatso). I was not only peeved that my more than adequate thighs were on show but that some dimwit had neglected to furnish me with shoes! How crass. 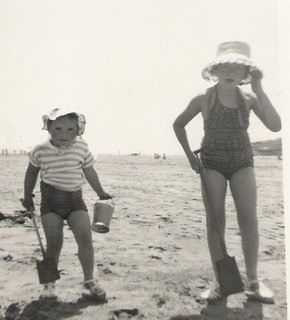 Here I am in June 65' and still holding on to those sturdy thighs. My sister and I hated each other until we were older and I was no doubt angry that we had been forced to submit to the wearing of identical swimming attire. I was also probably just about to clump her one with me spade for wearing a lampshade on her head!
Writed by Unknown at 1:20 pm

Well done, Minx, for being brave and putting these up. You were gorgeous! And just see how enthused she was, and still is! It's clear your inner child is alive and well. Pass on the challenge!

Lovely piccies of cutey baby Minx - just why is it, I ask myself, that all humans look the same when they're littlies. Or is that they just all look the same to me.

And yep, I can understand about that lampshade... ;-)

Brave? Did I have to be brave Shameless? Should one be brave about showing oneself as a small tub of lard?
I must tell you I have changed - considerably. Gone are the over-indulged thunder thighs and I don't possess a swimsuit anymore that hits the ground once exposed to water.I do, however, still enjoy a good hat but very rarely get me knickers out in public!

So come on you lot, get your fat knees and bad jumpers (Shameless) out and let's see what you are made of.

Your sister clearly seems like one of those "life of thr party" types, while you were no doubt trying to build something wil real meaning with your little pail.

At the very least, you look braced to flee.

How can you say that MT? The twat has a lampshade on her head, in public.

I'm nothing if not brave! No thighs on view here though: http://www.flickr.com/photos/windscreenfly/36219512/

But if it's male thighs you do want: http://www.flickr.com/photos/windscreenfly/36289143/in/photostream/

More lampshades Lehane - are we of an age? Nice sideboard too.

Lovely pics, Minx. Great idea this. I now know what the next post on my blog will be. Thanks.

What a great blog... you're a brave woman for posting your "kiddie pics"... I think I have manage to lose all of mine.

I only meant it in the sense of the "lampshade on the head" = "life of the party" thing that still manages to be a cliche in spite of no one ever doing that in real life.

I wish some pics of me as a baby survived. I'd happily join in the fun.

She sure is! She's such a widdoo cutsie pootsie! Wook at her widdle wegs!

Cute baby!! But the important question here is, were you wearing frilly rubbers at 7 months?

You'll be shocked to learn that I refused to wear shoes until I was two!! It's almost enough to make a woman ashamed of her childhood!!

Sharon! You should be ashamed. Very ashamed.

And pack it in you two - baby talk indeed - I'm going to be sick!
And for goodness sake have a word with Moon Topples, will you? If he wants to hang out with the English blogs then he will have to get used to sarcasm and a life less literal!
Welcome also to Paula. Do you want to compare waves?

Aww, you were adorable. I love chubby babies. Pity you've changed so much...

My grandmother used to say, "When you were little, then you were nice."
http://www.johnbakeronline.co.uk/photographs.htm