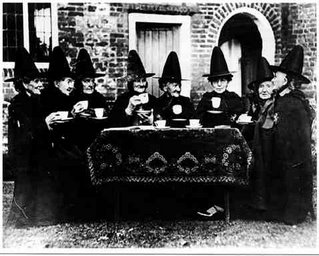 We haven't done it for ages. Life, jobs and a summer spent on the beach have kept us apart, but this morning the evidence was there. A table full of empty wine bottles told me that I had been 'Ginned'.

Historically it started with tea. The girls and I got together on a Saturday afternoon to escape from the football that was either being played, or watched, by our menfolk. Our children were small, needy and unable to withstand the rigours of shopping that had dominated our Saturdays BC. We huddled around the teapot, exchanging moans whilst our offspring played together and our men went off to bond in shorts!

As the children grew we swapped the pot for a bottle, and the 'Gin Co-operative' was formed. Saturdays became a therapy session that no psychiatrist could compete with. The world was put to rights, mad ideas put into action, personal problems were sorted, and we could face the week again as working mothers.

I came down this morning to find a list telling me that once again we had arranged something under the influence of firewater. New Years Eve promises to be one of the best, but I still can't work out what 'pimps on sticks' are!

May I say how particularly gorgeous you look in this pic ... Love the shoe ...

Thank you Debi. There is of course just the one - times was tough in them days and a good heel was hard to find!

I hope the alcohol is still poured from a large fabulous teapot!!

Unfortunately I remember yesterday with a clearer head than you.....and I'm never, never, going to tell you what pimps on sticks were.........

Oh man. I need me a Gin Co-op. Girlfriends to drink with and bitch with is something I've missed in my adult life.

So, I've bit my own tongue till it bled and hoped I was doing everything right. Maybe that's why writing has squeezed out of me.

Every woman needs a Gin Co-op Roberta. Your partner is in severe danger of having his life expectancy cut in half, so get one - quick!

A Gin Co-operative? Have the rebranded the Womens Institute? Bloody Spice Girls, they have a lot to answer...still!

I know what you mean Minx about having a safety net to let off steam about.
There was me this am having a smoke on the back doorstep, bemoaning the lack of a co-op of my own to belong to. Since moving town last year it's been a bit difficult to get to know people in this kind of way and the network of friends that I had is more difficult to get together when there's 30 miles between us.

What I've always liked about a group like that is that it really helps to put your life into perspective and you usually end up laughing at the world's travails.

No offence to the menfolk but in talking to the other half, there is a tendency for them to get a bit wound up instead - since they seem to believe that somehow because you're moaning it's all their fault, and the effect is counter-productive.

I guess I have to settle for the online version instead!

'A` safety net to let off steam' - err, umm, no Cailleach. An excuse to get pissed in a pack maybe!

And yes, count yourself in, an honorary Gin.