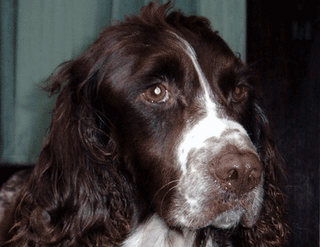 We didn't mean to, he really was an accident. We were minding our own business, with no thoughts of getting a dog but there was a conspiracy, a dollop of fate, and us being in the wrong place at the wrong time.

We were dropping some old blankets off to the local rescue centre and there he was. An overweight, neglected lump of lard - slow moving, mangy ears with a pair of eyes that melted the heart.

'We're not doggy people' I tried to reason 'we like cats, don't we?'

We all agreed, but an hour later the hound had taken up residence, and has been with us for eight years.

It wasn't all plain sailing, he is a problem dog with autistic tendencies. He doesn't like walking, hates the beach, he has to have vallium on November 5th and tries to molest the cat at every opportunity. He has attended every dog school going and failed miserably, even getting chucked out of two for misbehaving. He steals my underwear from the laundry, attacks the hoover and drinks from the toilet - Useless!!

He is sixteen now, well past his sell-by-date. He has a heart condition, arthritis and is gradually losing his sight. We know that his days are numbered but he will leave a surprising hole in our lives when he goes. He has been a Useless dog, in every sense of the word, but he is loved, and it is enough.

Not unlike my late English springer spaniel, Toby, your dog has become a much-loved family retainer!

How great is is that Useless has lived such a long life. How good you have been to him that he has reached such a ripe old age.

Toby is buried in my backyard and has a headstone: "Never was there a better dog." He made it to 14.5 and was put to sleep a little over a year ago. Such heartache.

Lynne AKA The Wicked Witch of Publishing

He's gorgeous Minx! Quite gorgeous.
I love English Springers. I once had one called Ollie, also liver and white.

Lynne, I think Useless is only still with us out of spite, that and the fact that he never goes out.
I should think his headstone would read "Never was there a dog more Useless" - unless anyone can think of anything better!

CFR - he's not gorgeous anymore. He has cloudy eyes, a large in-operable lump on his chest and he smells!

Forgot to say that we did call him Ulysses at first but the Feckers couldn't say it. His original (kennel) name was....wait for it.....Zachariah Hornberg Bellingham the Third

I think Useless has achieved what we could only wish for - He is simply "beloved" and needs no further accomplishments. I think every human being strives, mostly unsuccessfully, to attain what Useless owns.

What Useless owns is a bad case of morning wind, and breath that would take the paint off!

Laughing at that last one Minx; dogs do have that way of bringing you down to earth. Great piece!

You love him, you named him for his personality - what more could a pet with a good home want?
Growth'n'all - he's still gorgeous and I'm sure still well loved and appreciated as his days draw to a close...

My springer Ollie had a sudden end. My biggest regret is that I was not at "home" at the time. He'd remained with my parents and I had gone off to London for work. And then I went to Canada for a while. It was while I was in Canada that I received the phonecall to tell me his heart was too pressured and the vet had speeded his end by injection.

I have three acute recollections of Ollie which see me through.

1 He was the runt of the litter puppy to see me through the wait on my 'O' level results - a distraction that endured, as any pet could provide, if taken on for the right reasons.

2 He was once run over by a couple heading out for a "tarts and vicars" party, which had him down, both physically and mentally. But, for a dog full of enthusiasm, I realised he was on the mend when an old friend of the family came to visit and he tried to jump up on her, as was his usual want.

3 He used to curl up and go to sleep on my father's lap. Then my father had an accident and eventually returned from the hospital. Ollie knew something was wrong and was tentative, sensitive and generous. He sat at the side of my father's chair and took guard.

I think that dogs are wonderful creatures. Ollie helped me see that, may he RIP.