The language barrier - a grey/gray area? 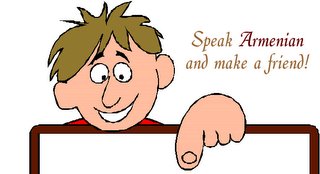 Bored with the lettuce nibblers at lunchtime I stuck my head in a box of education mags that no one ever looks at. After nearly giving up on the infernal, whining drivel I came across an article that nearly dislocated my eyebrows.
'Phhwhaaat?'
Apparently the American children are having trouble understanding English!
No, no, let me explain. Kids in the States are having trouble with English-English (so good they named it twice!) but Australian kids understand English-English because their language, Australian-English is closer to it. Are you with me?
Have I just slipped off the edge and unbeknown to me the Americans are now speaking a different language?
Just because one of our illiterate English emigrants failed to put the 'e' in gray and missed out the 'u' in colour, does this mean that we are not communicating properly?
Oh, I know you lot like to refer to your trousers as 'pants' and you call your biscuits 'cookies' but I am quite at home with these terms and don't have much difficulty with translation. There are far worse things creeping into our beautiful language.
At a meeting the other day a powerfully dressed woman introduced me to her 'cosiate' (her colleague and associate!). Call me a cloth eared bint, who's dafter than a bag of spanners, but isn't this taking it just a little too far.
Still that's English-English for you!!

Ha funny, I've just been more or less talking about the same thing. Take it from me American English is very different to English-English. Our language is rich with idioms and puns and other words that do at times make us incomprehensible. From experience, they have no idea what it means to be 'Up shit creek without a paddle.'

As an editor on an international journal whose house style is English English, let me assure you that US English (not American, they mean "US" not Canadian, Mexican, South/Latin American!) is very different. Most of our authors are from the US. Editing is a constant battle.
Apart from the different word usage (and different words), there is different grammatical construction. And different fashions, eg US English is quite happy to have 8 adjectives or adjectives-turned-nouns qualifying another noun. When you are dealing with very technical prose, this is a bit of a poser!
Anyway, beats Japanese English -- the Japanese do not have definite or indefinite articles. It may sound easy to edit an article without "as" and "thes" in it but take it from me it is very difficult. Especially if the author is aware of the lack and has had a go at adding a few in (randomly) his or herself.
Funny old life isn't it? !

Aren't you glad you've got comments back? Now you can read weird ramblings from the likes of me.

It made perfect sense to me, Minx, except for "bag of spanners". My husband and I often talk about the permutations of everyday language. If a group of us were to head off to the moon, it wouldn't take very long until our language became totally incomprehensible to you Earthlings. I don't think all of the variations are to be looked at as 'bad' though. I love new and creative uses of the language. I notice, for instance, your use of the word 'bint' in your essay. That's quite foreign over here and I would venture that ninety-nine percent of 'born and bred' North Americans wouldn't understand it. The wonder and joy of English is its adaptability.

Poor dab, take that wep off your chops now butty and talk tidy like.

Oh dear, Skint just said something completely unintelligible to me...

An old, old discussion, but always interesting. After learning several truly foreign languages, I tend to come down on Minx's side, despite the editorial difficulties. Try to understand a teenager from your neighbourhood - now that's a foreign language!

By the way, Maxine, a relation complains of similar stylistic problems regarding technical prose, and she's an American editing Americans in America, but she claims the problem lies with poor wrting skills.

A second thought (thereby using up my lot for the day, I s'pose): I wonder what effect the internet will have on English, since crossings and clashes always lead to language change.

Susan, here's a good link for those of you across the pond, mostly reliable if occasionally outdated:

Thank you for the link! I've put it into my favourites - now I'll be able to keep up!

I'm back and not much further ahead. Skint's comment is still unfathomable. I went to the English slang dictionary and I've got this: Poor (able, competent workman) take that (no definition for 'wep') off your face now (sandwich!?) and talk (properly).

My Gar, look what ee gone an done whilus were kippin!

"Cosiate" is a cry for help - It is used by people secretly yearning to have their heads pounded against a table until they are the consistency of Tescos lean steak mince.

No worries here Cheesm. Have a dreadful habit, when faced wih suits, of lapsing into a thick Cornish accent - whipped the wench with my waspish wit and she never knew the difference (up countrier you see!!).

Geordie Skint?
Mebbe tha should be liggin in tha bed a Satda!

talk tidy = reference to Wenglish, basically English with influences from the Welsh language

Wenglish!!
Brilliant something new to learn.

Tell me all, what did you call your sports shoes at school.

A friend called hers 'daps'- Bristol area, another calls them 'pumps' - Nottingham. In Torquay, Devon, where I grew up, we called them 'blackas'.

Oooh this is such fun and has loads of comments. I don't actually have anything to add - just didn't want to be left out ...
Though if you insist I could point out the number of Yiddish words in common usage.
Oh and by the way, it's pronounced BUYGL not BAYGL - even though the spelling is beigel, or bagel ... different alphabet means spelling is a bit irrelevant.

Debi, depends where you buy your BUYGL!

(Must be the fumes of Skint's beer wafting this way across the web. Me, I can only afford lager.)

Alphabets, now there's a thing.
German has this fascinating little thing that looks like a 'b' with a squiggle but sounds as 'ss'- I learned this during my German revision.
Couldn't figure out half the words (I did French at school) and Big Fecker spent most of his time rolling on the floor laughing at my pispronounciation!

Lee, I'm very worried about you. Are you awake all day?

My cousins in somerset also said daps, but we in South London said 'Plimsoles' although I far prefered daps. Plimsoles, what sort of a poncy word is that?

Yeah, agreed, poncy. Like pumps better, my friend pronounces them 'poomps', she also says 'trot on' when we're off anywhere!

Oh Please.. the Situation is worse than you think !!!

Not only do we have to worry about Australian-English and English-English, but we are now having to remind our youngsters simply to go back to using American-English!!!

Why, you ask? It's because of the internet chat era - everything now is LOL, LMAO, BRB, TTYL, LUVU4EVR, ETC..!! And, believe it or not, kids have begun to use these abbreviations in written papers - not just in the virtual world!!

The (only and not so great) silver lining? = this language seems to be more universal than all others and is being picked up rapidly all over the globe - regardless of country or language of origin..

So, before you know it.. everything will be abbreviated -

Kwim? Don't know that one and I dont' think I need to learn!!
The one that really irritates me is the use of a lower case for 'I'. No, on second thoughts they all irritate me!
Maybe I'm just showing my age and they are just showing their's!

Think Blogger is having a little game with me. Magic WV says: USABRV

I'm sure there are times in my life when I would have found a bag of spanners very useful.