It was Halloween but we didn't see it at first. The kids all walked by the window and none of them saw it.

And then the sun started shining - and we looked..... 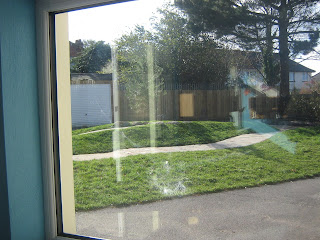 Was there something there, or were we imagining it? Was this some kind of ghostly impression or did the window just need a good clean? 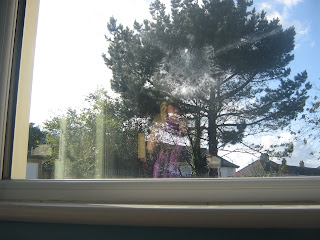 If you moved around a bit, it looked like a feather-like impression on the glass, a breath of something that had only been there for a micro second.

It was only when one of us held a black piece of paper up behind it that all became clear.... 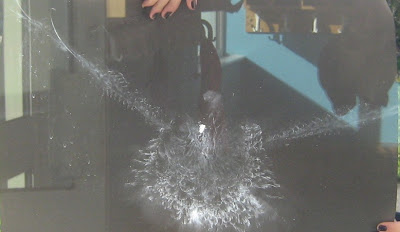 The poor pigeon had been captured at the moment of death, its last flight etched on the glass and it lay not far away.
We made it a shoebox coffin and thanked it for the wonder it had left behind. I expect it will be gone by tomorrow.
Writed by Unknown at 7:17 pm

Saw the same thing several yeats ago complete with a pigeon perfect grimace on its head first face etched by the dust they must cultivate just to keep down insects. It remained for weeks on a window nobody ever cleaned.

Oooh. I've seen birds throwing themselves against windows in panic while bombs fell around them and others confused during an eclipse. Wonder what drove that one ...

FB, I couldn't believe the detail of the wings and feathers. I wonder if we would leave such a lovely impression.

I think it was a quick end, Babs.

Yay, Yodood, I am supposing that it is a danderish dust rather than its poor little pigeon soul left smeared on the window!

I sort of think it must have been like Will Smith in Independence Day, Debi. It was chasing something and couldn't pull its engine up fast enough!

pee ess - okay, I know it wasn't - the pigeon was stoned and didn't see/understand the window!

You should of eaten it!!

Oooh, Minsk, That's a good 'un!, yours was going a bit faster than mine, it seems. We found no corpse, so assumed it lived to fly another day... or got carried off by a cat, or the fox...
http://gritinthegears.blogspot.com/2007/09/pigeon-discovers-solid-air.html
Maybe there's a niche for pigeon-strike blogging.
The mess they leave on the glass just reinforces my dislike for the flying rats.

I did an almost identical blogpost about this last spring.

I had no idea it was such a phenomena.

I think my stomach would stop the rest of me hitting the glass,a huge attack of the munchies has left me a little tubbier than last we met.

Yep, we have speedy pigeons around here, Soub, and your pic is also fascinatingly horrible. Is this just a pigeon thing?

Was yours a pigeon, Hoodie? I am wondering if they have a radar malfunction or something.

I am just wondering if I can paint the kids and then splat them against the window to see what happens, FB - they don't look too keen to test my theory.

It kind of reminds me of Snow Angels.

And what was the last thing that went through its mind?

Sorry, quite a sight!

Apologies for the improper use of the possessive apostrophe in the last comment. I'm an illiterate thug.

Around here it happens a lot. Especially when the fall berries come on. The stupid birds get drunk and lose their bearings.

That's why we don't clean the windows here...we're thinking of the birds. That's my story and I'm stcking to it. Shame you could't find a way to take a permanent print of the image, a sort of pidgeon shroud of turin. Lovely image.

This happens regularly around here. The windows are regularly smeared with the outline of doves who've flown into the windows. There are so many of them and there's a sparrowhawk that hunts in the garden so the doves take off in a complete lather.
The amount of detail depends entirely on the force of the impact when the bird hits the glass.
Strangely enough, most of them actually survive. They tend to fall into the shrubs, where they recover their composure and then they flap off. They're remarkably resilient. The less lucky ones have to be buried and if the sparrowhawk's feeling bold, he'll come and get them out of the shrubbery, pluck them and take them away in his yellow claws.

Nature - red in tooth and claw.

And dumb in brain when it comes to our feathered friends, it would appear ...

Snow angels without the death and destruction, FB?

It's good not to be possessive about them, Jon, share them around!

I know how they feel, Roberta, take last Saturday....

Shroud of Pigin - I like that, Noony. The glass in my own house is 120 years old - very imperfect and very grubby = no bird strikes.

This is the first time I've come across it, Vanilla, I'm sort of glad it doesn't happen that often.

Then I think we should pinch the ruskies technology, Debi, before any more blind, drunk, stupid, dim and confused pigeons throw themselves at our windows.

It would have been interesting to remove the image with some laminate paper or something. Then frame it. The greatest artists are known best after they pass from this world....
Poor pigeon!

That birds a Squab on Glass now!
Bon Appetit!

Only nature can leave such a beautiful impression. I can picture you and the children at the burial ceremony. It probably brought comfort to you all.
But I'll be honest. Perhaps just having watched The Ninth Gate with Johnny Depp and reading the beginning of your post, lent an eerie tone. Fascinating post, Minx!

It is almost gone today, Lilwave (waves!), and there was no rain to wash it away which sort of added to the ghostliness.

Vegetarian, Bullets, no pigeon pie for me!


Heh, I am good at funerals, Petra. I once presided over a hamster burial - one highly decorated coffin (cardboard box) and sent off to the theme tune of Thomas the Tank Engine.

BTW - I am now worried that there is some kind of worldwide pigeon suicide pact. Anyone got any other theories?

hahaha, Minx, I'm sure! I'm here
Minx because I'm honored to pass
"The Superior Scribbler Award" to you. It's on my petra michelle blog. I'm not one for rules, so do with as you please. Some post, some don't. I've already broken one of the rules by adding five more than I should have. I feel it's the recipient's right! :))
But as a writer, I truly enjoyed receiving this one. And I hope you do as well. Love your scribblings!

Petra, first of all, thank you, maybe I should be doing a Gwyneth Paltrow! However, I have never been very good with either memes or awards since I have been blogging and have always had a problem with the word 'superior'.
I hope you will forgive me if I just accept this without all the rules, regulations and trumpets, and just say a very quiet 'thanks'.

mine was a mourning dove.

I wish it were just your window in need of cleaning...
I love all birds, my heart breaks when they're hurt...

Hoodie and Vesper - I've been sent all sorts of pictures and links to this (mostly pigeon) phenom. Maybe their diet is causing some sort of ADHD!