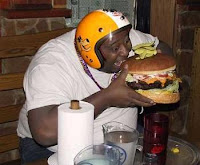 I watched a documentary a while ago - it was about a morbidly obese family who were living off takeaways. A steady diet of processed meat, too much salt, an abundance of fat, enhanced flour, refined sugar had eventually led to the father being cut out out his house and carted off for a gastric bypass to try and stop him dying before his time.
Thousands of dollars were ploughed into this family to try and educate them that overeating was possibly dangerous to their health. In the meantime they were still feeding burgers to the four-month-old baby.
When it was announced that it was cheaper to feed a family on takeouts than it was to prepare the mega abundance of local fresh food I was nearly physically sick.

Isn't it about time we looked at the difference and started to redress the balance? Aren't we all entitled to a well balanced happy meal that isn't going to kill us?
Somehow I don't think the mother of the child below would understand that concept either. 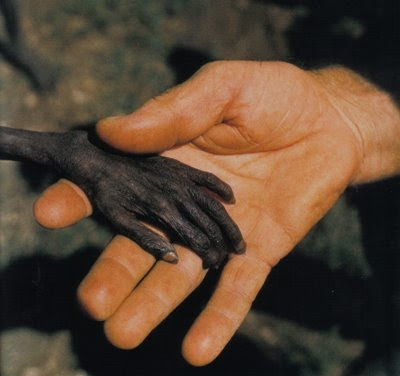 Today is BLOG ACTION DAY - POVERTY (see the link on the top right for more details).
Over 11 million people are going to read blog posts on the subject of poverty - please read some of them because it applies to all of us.
Writed by Unknown at 7:33 am

The thing that hits me over and over again when reading the blog action day posts is how HUGE the problem is. It's not one problem but many - it's multi faceted and we need major mind shifts to tackle the problems and we need multiple solutions, though I'm thinking a shift in values and improved education play a very big role.

Education begins at home, Vanilla, maybe if we could stop ignoring the poverty that lies in our own back yard we could eventually reach out to the rest of the world as well.
Every other child in the world lives below the poverty line - is this something we can ignore forever?

Have you been watching Jamie Oliver's Ministry of Food? It shocked me that people actually have no idea how to cook and are bringing up their children on absolutely nothing but take-aways. Surely those kids aren't going to make old age on a diet like that?

If you're interested, Jamie has a thing on his website where you can sign up to help persuade the government to put funds into building centres in deprived areas where people can be taught to cook properly. You'll find it here

i love your post! sadly, man ain't gonna change but at least we the bloggers are making a difference here.

thanks for the sharing!

Thanks, Lane, nice to see you!

Sharon, the Feckers know that you can rustle up something cheap, tasty and good for you, in a few minutes because they have watched (and helped) me do it.
I used to be surprised that not everyone 'cooked' every night until I was presented with our local literacy figures. The maths is simple - if your reading skills are compromised and you had no role models then the chances are that you won't cook. Couple this with the fact that the cheaper value foods have no pictures on the packaging!

Hi, CS, think positive - we can change the world!

Minx~~
Very well done. We have the same problem here in Appalachia. It's cheaper to feed a family on take-out and McDonalds than it is to fix it at home. Add to that the fact that most families have two working parents and are stressed financially - well the math is simple.

I for one have never, EVER, scrimped on meals at home. I've always said, "What goes in is nutritous and keeps the doctor away." Now my grown sons are doing their own cooking instead of grabbing a fast-food fix. They have become more and more interested in fixing well balanced, nutritious meals for themselves and their friends.

I want to thank Sharon J for that link! Very interesting and might work here!

I could not take my eyes off of that last image... so incredible and horribly sad.

This must change, everywhere. It just absolutely must.

and i think of my own children's baby hands - all rosy and plump ...

and i cry for both.

I've used McDonalds, Roberta. Usually to use their toilets but on an odd occasion also to grab food when I was rushing around with the Feckers. Luckily they don't really like fast food very much and prefer homecooked meals. I also can't see the attraction of a processed slab of meat in a processed tasteless bun.
Sharon's link to the Jamie Oliver campaign is good. I've been watching his programmes and he really is making a difference. The theory is simple - learn to cook something from scratch and then pass it on...

That image struck me as well, Scarlett, and I wish that it would affect more people and not just when the news and media remind us that this goes on in our world.

The right of all children should be to have rosy, plump hands, RDM. The 30g of fat in a MD meal would be a life saver here.

Tears. Can't get that last image out of my head.

I left a comment on Ab Van's Blog Action Day post re the way education has to also reach those people who are educated in the traditional sense but need a whole lot more targeted education in order to truly 'see' the real problem and the part they play in it.

Hopefully, Blog Action Day won't only preach to the converted but will also reach out further to change hearts and minds.

Yes it's all mindblowingly insane - but do you get the feeling everything is just about to change globally in one massive economic,ecological about turn? Fasten your seatbelts everyone.....

Your observation,
"What kind of twisted world am I living in where poverty can kill you with overeating, or kill you with undereating?"
really struck me.
Both images are heartbreakingly grotesque.

When I was searching for a picture, Debi, I found loads of horrific photos of starving children but that one is the one that stopped me in my tracks. The effects of poverty are more than clear.
Anything that we do has the potential to change hearts and minds - its only when we sit on our well stuffed asses that things stay the same!

I do get that feeling, Meloney, maybe this will be the leveller that the world needs.

That's it, Leslie. These people are dying of obesity because for the most part they are unable to afford a stock cupboard of foods necessary to produce a healthy meal for a family.
I would argue that education plays a large part in this and thank the Goddess that I know a hundred recipes for one onion, a large bag of pasta and a dodgy looking clove of garlic!

That picture is really really hard for me to look at but not as hard as what that child must be going through.

I feel ashamed of me for having so much.

I need to give, maybe to the food bank.

And onion, a dodgy clove of garlic, a bag of pasta and thou...
I'll be right over.

but you know minx, it's odd. its all odd and upside down. where i live, upcloseandpersonal to poverty, people will forfeit the few shillings they have on mobile phone credit. a man will spend his entire monthly wage on a cell phone. western materialism has snuck in and plays a peculiar god. that's odd.

We can't help the society we were born into, Jannie, but we cannot close our eyes to what goes on around us. With a little effort we can make small changes eg: instead of doing Secret Santa at work put all the money everyone would have spent and buy a goat from Oxfam!

And you would be very welcome, Leslie...my cauldron bubbles!

Same here, RM, I live in a poverty stricken area but everyone seems to have satellite TV and a large dog!

I can't find no link to Poverty, but I did my post for Poverty and linked to you, Slim.