The witch and the vicar – a tale a blinkered perceptions.

“I know that” said the constant friend “but it will be all right.”

It wasn’t going to be all right, it was never all right. People with titles like that had attitudes they had no right to possess. Titles led to trouble – it was the law.

The witch bit her lip. Biting lips was a hazard of an occupation that involved avoiding anything to do with dog collars, smells, bells, heaven and hell. As far as the witch was concerned there were far too many blinkered donkeys in the world who failed to see even one side of the coin let alone the five brilliant points of a misinterpreted star.

“My friends are not like that.” said the smilingly smug constant friend.

The witch raised a practised eyebrow and treated her knowing friend to a smirk and said “I know but all the same I will leave my heathen symbols at home and won’t mention stuff that could cause fights that involve hospital visits – promise.”

It was always best to keep your head down when the spiritual bullets were flying – less wounds, less blood all round.

The last time the witch had encountered a man of the cloth there had been much teeth gnashing, fist clenching and general discomfort. The cloth man had gone a weird shade of puce and removed the biscuit tin so as not to prolong the visit. The witch had raised both practised eyebrows and consigned the man from the God Squad to the same place that the biscuits had gone. Once again, the refusal to acknowledge that the world was full of paths, many paths, had rattled her belief in her own humanity. He had failed miserably to see that her pointy boots could possibly share the same road as his be-socked, be-sandaled feet. Yes, really, not only a blind donkey but also a bad dresser - just another reason to remain resolutely pagan when all around there were the blue flashing lights of the fashion police. Vanity was a failing that she had long since come to love.

So, surprises were not on the agenda. The witch would play the game by their rules and everything would be lovely but unfortunately the Gods and Goddesses were having a party in the kitchen along with the biscuits and had decided that ‘Boo!’ was the word of the moment. The witch raised more than just her cynically poised eyebrows, matching her mouth to the shape of someone who had just been shot in the ass with the surprise bullet.

“But?” she spluttered “I am a witch of the world. My stripy socks know exactly where the ground is and my pointy pagan hat is shock absorbingly shockproof.

“Mmm hmm” the constant friend said “I did tell you.”

Being told was different to experiencing. This man of the cloth was a man of all worlds. His eyes were so open that they were positively lidless. Not only was he smiling openly when the ‘p’ word was mentioned but his was also adding, not only his ten penneth, but the rest of the index linked inflation since the dawn of the groat. Acknowledgement and understanding from this mono-god follower was definitely hitting an itch that the witch had not been able to scratch for quite some years.

Funny really, lessons came in the most surprising bottles of potions and the taste of this particular medicine was all together the sweetest that she had tasted for a very, very long time. 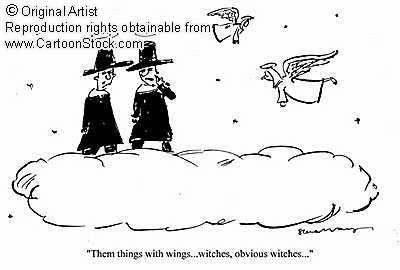 You've been on the Red Bull and vodka again haven't you?

This tale reminds me of a ladies Mono-God event that I attended many, many, many years ago.

I will never forget one of the women speakers ask the audience of ladies, "How many of you have earned your Junior God Badge and carry it with you at all times?"

The ladies looked around at one another with eyebrows raised, murmuring. No hands raised.

The speaker then went on to add:

"You know the one I am referring to: the badge you whip out when you correct, judge and / or condemn family, friends, the people that surround you ..."

At this point, no one dared raise a hand. No one dared look up. I saw and felt many a red face that day. I made certain to toss my junior g. badge into the trash can as I exited the auditorium.

It was as though my eyes had suddenly been given the gift to 'See' - and I realized it truly was just a piece of useless tin.

On another note: oh please, please tell me that your lovely new, pointy-heeled boots are the color red .... sigh. Envy is green, is it not ?

ps. I've been told I bite my lip as well - but under entirely different circumstances.

OH! Here I was all ready to say something deep and compassionate when I read John G's smartypants comment and laughed all the air out of my sails.

But I do like this very much, we (humanity) *must* reach beyond the familiar little comfort zone bubbles that we live in, to touch and experience things we never knew we never knew about. To grow beyond everything we can imagine.

I've given speeches on this very subject. It is imperative to try to see beyond the obvious and discover what is underneath; aren't we always surprised, one way or the other, when we do.

I hope that you and your new boots have found a good new friend to walk the road with for a while.

Hi, Blossom, and welcome. I suppose we all have ownership of a JG badge at some point during our day/month/lives! Depends whether we choose the bin or the crusade, I suppose!
The heels are black but I also have a very nice pair of green ones - oh dear.
Lip biter, eh?

So do I, Jon, many times over.

Scarlett, I always seem to start off very seriously then it all descends below the knee!
And yes, you're right - keep those eyes and ears open, surprises come at the most surprising times.

The nextImp I run into with a God badge ...I'm just gonna shoot first and send 'em to hell and ask questions later...
Let water over the bridge just lie where Jesus flung it.

I've been having to deal with a bunch of this lately and I just can't take anymore.
Nice post-weird story- fits perfect.

If you are going to shoot the badge wearers, Bullets, then what exactly would you do to this lot?

Ya'll seem OK to me so far...I don't mind being teased, no, I want you to, or even ridiculed ....but I take no unsolicited counsel but my own.
So....there!

Peace and that. I am sure you wont mind if I give that party a miss will you?

Does this mean I'm a witch?

(Trying to find my pointy boots and stripped stockings, but knowing full well I threw away that Junior God Badge a loooong time ago.)

...as for potions, well, I do grow my own herbs and say a lot of curse words.

And so you shouldn't, Bullets, but wouldn't you like a nice pair of 'Armor' pj's?

Miss the party, Muts? You can't. There will be tea and everything.

Blessed be, Roberta, and you is a fully fledged witchy type!!

Ah john.g beat me to it! An interesting tale of non-judging, glass houses and stones...

Hello hello, a few of us here now... minxes and blossoms:) thinking I need a sexier nom the plume than the
one I have..This is going to be one fine party, biscuit or no biscuit:) I hope minx, you are still wearing those shoes:) You put things into my mind and I am heading for the Jimmy Choo shop, you will know what I bought when you get the bill:) Oh... and that vicar.. it is a good story.

HA! I am just reminded of the time my father was applying to become a minister of the church. The bishop came to the house to discuss things over tea. Dad had to run upstairs for some paperwork and left my mom alone with the guy.

The conversation went this way:

"So, what do you think about your husband's new calling?"

"Look. This is HIS gig. I don't have big enough hair to be a preacher's wife."

This tale was gloriously wicked, Minx!

Wordcrafter, I will refer to a post further down the page called "Red or Dead".
Just be aware that a sexier nom de blog can cause all sorts of trouble, heh heh!

I think I would get on with your mom, Roberta.

PM, thank you, wicked is as wicked does!

I can testify to the very very niceness of them there pointy boots.

What were you doing still up?

You know I like you & your tales a lot, but being an atheist I'm quite at a loss as how to respond to a story about a vicar & a witch.