When I was younger I used to moan about living in a county that was so far away from what I considered the nearest hive of trendy culture. Cornwall (the pointy bit hanging off the end of England) was not only the butt of numerous local yokel accent jokes but was also considered to be the epitome of a cultural desert.

It is not until we have visitors (Debi and co, among others) that I begin to wonder what they make of the very individual local culcher that lies between the public face of pasties and clotted cream (local delicacies laden with lard and fat).
Better known for our sleepy villages and dramatic coastline (HERE) , Cornball is also known for the high percentage of artists who migrate here to soak in the clear light and churn out numerous paintings of boats in picturesque harbours. But up-to-the-minute, cutting edge culture - err, maybe not....


We have theatres (if you don't mind sitting out in the weather on the edge of a very dodgy cliff). 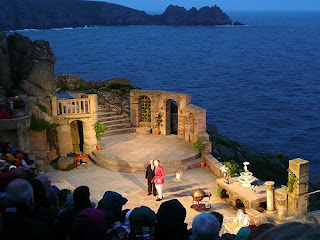 and the Tate St Ives is, yes, you guessed, overlooking white sand and sea... 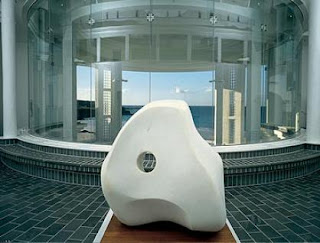 As Debi found out (heh heh - when she was 'funked up' for the night), local bands (HERE) have a huge, age defying following.
Living in a far flung part of the kingdom may have its disadvantages but I don't think we can be accused of not making up the bits that we lack. We may not be trendy but we are enthusiastic!
Writed by Unknown at 8:38 am

Recently watched one of the Travel Channel's slots on Cornwall - looked like it was trying to be dead trendy to me - but not cutting edge trendy - more it's own kind of trendy which I thought was deeply cool. And I immediately thought, must pay that Minxy person a visit when my bum finally lands in good ol' Blighty.
Culcher smulcher, I think you live in a wonderful part of the world!

Yay, a sort of quirky trendy, Vanilli, and not one that I would really swap for the dead cool of city life (I don't think).
And yes, come and stay, no elephants but plenty of weird stuff to blog about!

I think it often takes the visit of someone not used to the area to help you shed the scales from your eyes and reappraise exactly what you have around you.

When Shameless came to visit in Dundalk we brought him to the mountains, only five miles away to tell him all about Cuchulainn and the myths and legends of the area. Whilst up there (lucky it was such a sunny day) we showed him the gorgeous vista down to Dundalk bay.

We mightn't have a lot of culcher here, but by heck we have scenery!

Hey! I am already hooked looking at the picture of the "theatre" and the gallery.. this goes on my list of "places I must visit". You are doing a good job minx of promoting the pointy end of the kingdom :)

Oh! You found a link to the Funksters!

You live in a wonderful place, Minx! I would love to see it sometime.

(Reminds me of the time my mother said to future husband: "You didn't have much of a cultural upbringing did you." He still snarls and snaps when he thinks about it!)

Absolutely, Babs, Debi and her tribe have a weird habit of trying to get to the beach every day. I suppose I take no notice of it because it will still be there tomorrow.

Yep, I am that, John G. Just got home from a party. The entertainment was an entirely self generating jam session - we sounded very cool after a lot of wine!

I saw A Midsummer's Nights Dream at the Minack Theatre on midsummers night, Wordcrafter. Watching a performance with the moon rising behind the stage is quite breath taking. I really must blog about the Minack - another thing I take for granted.

We are just like America, Roberta, only in smaller portions, with less meat, fewer large buildings and more empty churches!

Oh, now I would love to attend a play at such a beautiful theatre. I remember Justin Hayward of the Moody Blues talking about Cornwall. I believe he and his family lived there? By my hometown's standards, yours is tres cultural!

Cornwall is awash with old famous people, Petra - well, not all old and some not all that famous! They probably hide away in their second (third, fourth etc) homes for a couple of days a year. Mr Hayward lives about 10 miles away from me but Roger Taylor's (Queen) sister works and lives just down the road. It's all cool if they behave themselves!

It is certainly trendier than here - whats that cooks name who bought a village and filled it entirely with restaurants?

You ( Cornwall) is one of the Best Places On Earth and That Is Final!

You're thinking about Rick Stein and Padstow, Muts, otherwise known as Steintown! He was probably attracted by the very saucy fertility rituals that take place on May 1st at Obby Oss Day. I think he has five resturants now - greedy pig.

I don't think I would want to live anywhere else, Jan, but sometimes you can't move for holiday makers and camera crews. 'Doc Martin' is filmed a few miles away (why can't they get the accent right?).
We should meet for a coffee next time you are down.

I think the key is that people in cities are far too cool for their own good and have forgotten how important it is not to take yourself too seriously.

No danger of that in your part of Cornball.

Oh yes, I'd forgotten how uber cool and serious you are, Debi - rolls off the bed, down the stairs and out the door laughing!

IOt is a nice part of the country..
The age of myth and lgend lives on there, I always feel.

Independently and uniquely trendy... you've got a following of friends visiting and planning visits and celebs just down the road... methinks then, it must be a hidden jewel, by the looks of it.

Trendy is shallow and overrated anyway.
The photos of your area that you post always give me such inspiration, like a faraway dream.

*laughing* Please wave a hello in Mr. Hayward's direction! The Moody Blues has been my favorite band since college! Uber cool, your hometown! :))

hello, Crushed, it is a nice bit but we are sooooo far, far away.

Hmm, well, Scarlett, it is a wet dream at the moment - it hasn't stopped raining for weeks - do you think we are cursed?

Oh dear, Petra, did I make it sound as if we are wading through celebs? They mostly hide away until you uncover one in some obscure village shop!

"pasties and clotted cream"...
Oh, Baby, I like the sound of that!
Hey Minxy!

Straight to the hips, Bullets! Stay away from bad food.

As long as they are well behaved dogs, Lola.

I think it's good to be content with where you live, HM. I couldn't imagine being trapped somewhere that I hate.

Only if it's a precursor for the winter you're in store for...

I resent the suggestion that I am not cool. How very very dare you.

And if you've rolled off the bed, it shouldn't be me you're blaming. Harrumph.

But I thought Pasties were for your pointy bits.
Hi minxy!

Oh Debi, you are cooler than a cool thing and anyway, its about time I sampled some more London culcher, innit?

My pointy bits survive on more than just pasties, Bullets.