We maybe should have been daunted - two pagans and an undecided, barging in on a ceremony that goes back through the mists of time. Knowing Debi and her family, as I do, it was silly to think that we wouldn't be welcomed with open arms into their wonderful community.
With the feckers looking like two rejects from the Blues brothers.... 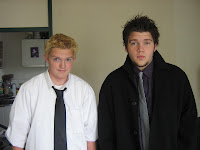 ..we set about girding our loins for the three hour service (yes, that's what I said) that would take FB into manhood.
FB was a testament to the strength of character that runs through his family. Coming down with measles a few days before his big day led to a very sick child walking into the synagogue but a real man walking out. There were tears all round.
The service was a bit like watching a play performed in a foreign language but there were people on hand to explain what was going on and they do at least feed you afterwards (mmm, fishballs, yummy).
There was also dancing, and drinking, and eating, lots of eating and more dancing- long into the night..... 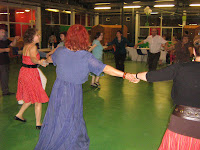 FB's Bar Mitzvah was significant on so many levels - proving that there is nothing stronger than the love of family and friends. 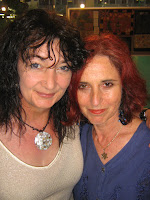 These two friends are for life, proving once again the power of the internet and the possibility of finding a soul sister halfway across the country.
Writed by Unknown at 11:57 am

There is enough light shining out from the picture of the two of you to illuminate the entire world!

Debi is one of the shiniest lights in the universe, Leslie.

Small Fecker is also very shiny today - it's his 15th birthday. His brother is 18 on Monday - what a shiny week!

Shiny, shiny! The eldest ant-hill-mob internee was 15 at the start of June too.

Glad to see some pics - it looks great and your words are lovely too.

What a lovely post, Minx! It gave me a wonderfully good feeling this morning. Thank you!

Your feelings and your friendship with Debi warm up this screen and my heart... :-)

All the best to your lovely Feckers! :-)

Oh this is wonderful! It is so nice to see two perfect friends!

Those boys are beautiful. Happy birthday to both!

September must be a fertile for us, Babs. Thank the Goddess I am over my baby making years!

Friends can make you feel warm and fuzzy, Vesper, and this one does!

They are two very gorgeous hunks, Roberta, I am very, very proud of them.

It's my today birthday, too.
The glare is blindin' me!

Looks like you have a couple of good 'uns there!

Autumn was always my downfall, Minxie - birthday season as it's known in my house begins in March and ends in June... time was when all I had to do was look at a man and I was off.

Them boys is fierce handsome - you'll be batein' the crowds from the dure, if you're not already!

Happy, happy, birthday, Leslie - may you have the shiniest of days.

They sure are, John G, two of the best.

Fierce handsome they are, Babs, and I am fighting a losing battle with the dure!

*THAT* was really something special.

Love the photos, and the images that you shared through your words. What a wonderful celebration of a milestone rite of passage.

And, amen to the internet providing soul sisters all over the world. Who knew what great friends we'd have.

Who knew indeed, Scarlett, this interweb malarky is a constant surprise!

Gone down with a streaming cold and spent all day yesterday asleep. Nearly caught up on the lost shut eye now ...

Oh Goddess, I gave you my disease, Debi! Don't worry though, you have a couple of years before the next Bar Mitzvah!

Good God. And I was worried about the measles being spread!

I must comment on the boys though, how is it that they manage to look so innocent and so mischievous at that same time? Happy birthday to them both!