All the leaves are brown and the sky is grey.... 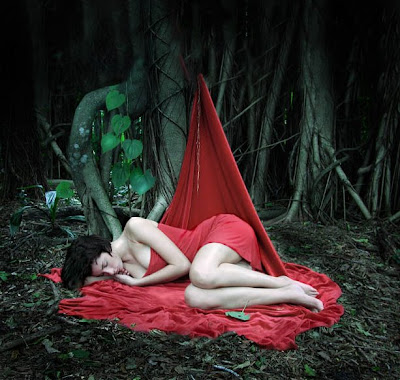 ...I went for a walk and there was a great big green moon in the sky and a man with a paper bag on his head asking me if I like Julie Andrews with my roast potatoes.

No, I haven't been at the herb, this might be a simple episode from any number of dreams I have every night. Often vivid, these dreams rarely leave my head for hours after I have woken and the good ones I will keep for days, picking over a particularly juicy bit. I think my brain is as busy at night as it is during the day and I often wonder if I will wear it out sooner than I should.
. 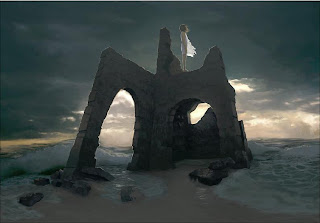 .
I was blessed, or cursed, with the need for very little sleep. I only feel tired about 1am and then I wake again around 6am and some nights when sleep doesn't look as if it's on the agenda I have to trick myself to sleep by reading a book with my eyes nearly shut. Before I had children I was a sleepwalker but now I just have mad dreams.

A long time ago I realised that some of my dreams were known as lucid dreams, dreams that felt as real as reality and it sometimes took me a while to convince myself in the morning that I hadn't really done, well, you know! These dreams can be quite un-nerving and there have been times when I can almost control what happens (I think).
. 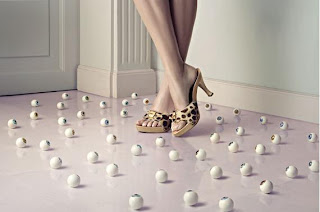 .
I can't ever say that I have dreamed something and it has come true and neither have I dreamt my way through a whole day, like some people, and wake up thinking it is Thursday. As a child I drove my parents mad with the sleepwalking and the constant repetitive dreams that I insisted on talking about over my cornflakes. My dreams range from the bizarre, the mundane, to the downright erotic and the only really bad nightmare I can remember was when I thought there were no enough people in the house - turned out I was forgetting to count myself.
. 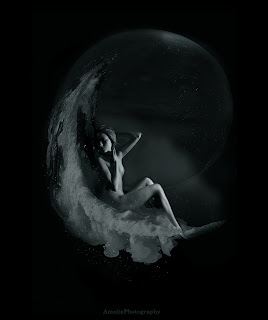 .
I also realised a long time ago that there was no point in analysing them. If I dug too deep then I would surely find out I was mad as a snake, and I really quite like them. Some dreams must reflect my mood and some are just some sort of internal theatre that puts on a play in the wee small hours. The brain is so clever, like some kind of personal entertainment system, all harmless, all perfectly normal, but probably a good thing that no one can read my mind!
. 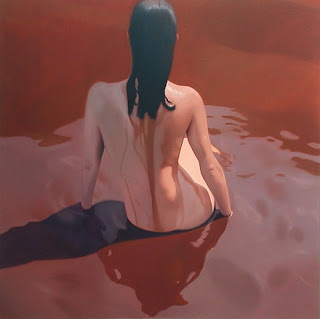 (mmm, warm chocolate bath, not something you see during daylight hours!)

Ah, Minx, as an insomniac (recovering) I envy your ability – gift – to get by on little sleep and still function.

Dreams are amazing, intriguing, wonderful things. I used to have a repetitive dream about a witch when I was a child, and a couple of other nightmares that still make me clench my teeth. Added to that minority of horrors are some beautifully weird and wonderful concoctions. The strangest ones by far are those that involve people you know where an odd scenario has occurred in dreamland and when you next see him/her you can't help but cast them as weirdo/villain.

A sleeping brain is so mysterious, Mellifluous.
I remember feeling really pissed off with a friend for weeks when I had dreamt he had done something objectionable in one of my night excursions.


Function? Some would argue.

Please do that voodoo that you do so well. Last night, Monday my time; I was with Nic waiting for his spot (Upfront club)and we starting singing the very same song...me doing my Moma Cass impersonation.
SPOOKY to quote Jim Carey

Your sleep patterns are frightening and mysterious to me. Which I guess is more or less appropriate.

And I have tagged you with the Niceness meme. Come on by and read all about how nice you are.

By the way - as you will know - dreams are a wonderful source of inspiration for stories!

I dream so seldom, but my god, they're good when they do happen.

That choccy bath is the ultimate dream. If only that only could come true ...


Spot on, Vanilli, dreams are an endless source of inspiration, just a word or a feeling can stretch into a poem or start something new. Except for some,the ones where you wake up blushing, and they will remain under lock and key forever.

there was a time when i used to dream stories and would wake up with excitement.. now i dont anymore and wish I did. totally identify with you on this.

What? So there's not going to be a nice bit of erotica in the sequel to Coven of One, then?

five hours a night, I've never slept more than that, even as a kid. I was surprised to learn that not everyone dreams in color, what fun would black and white dreams be?

Hello Mystic, I keep a pad and pen by the bed just in case something juicy comes along and if I've dreamt something good! (Why does the word 'dreamt' never look right?)

Dorcas having hot sex? How could you think such a thing, Vanilli?

I would think that someone was tampering with the colour control button, Kat. I like technicolour.

wooooo hooooo !! could you send me a little bit of that pixie dust you are using ??

no dreams here, either. and like mystic - i used to wake up with poems shimmering in the air above my head, just waiting for me to capture them with pen and paper...

sigh. no more. muse on holiday.

Have you ever had that half awake/half asleep time when you are paralysed and horrible little munchkin things run round your bedroom? Or was I abducted by aliens again?

Am I the only one who noticed that 1 pm to 6 am is 17 hours sleep? Which is about how much I need... because I love dreaming too, still even when I'm awake I day dream!

I'm the opposite - I need a lot of sleep (at least 8 hours). I have trouble remembering my dreams though. Daydreams are the best, at least I have control over those.

What a wonder the human mind is... especially yours.

I doubt you will ever use it up, I think you are making it stronger as you go.

They are worse, Dirt Girl and they are getting more imaginative the older I get. Whoo hoo.

Err, no Jon, sorry. But I do sometimes 'fall' off to sleep as if I have just dropped off the world.
The munchkin things are called children - get a lock on the door!

Perfectly right, V, will amend, was probably a bit sleepy!

Oh, oh, Marie, don't get me started on daydreams, that's how I write!

No, sometimes it is just a cauldron of murky looking soup, Scarlett. Sometimes I would really like a lie-in. When did I lose that talent?

Oh, gosh. I'm afflicted with it ALL, except the 5 hour sleep cycle. I'm a seven hour girl. Technicolor, erotica, lucid, nightmares, repetative, clenched teeth, munchkins in my terrors, being mad at people in my dreams (poor husband)...
And I'm sure I do "go" places, and have learned the art of supersonic flight, sans conveyance.
Minx, DO you take Julie Andrews with those potatoes?? And why does everyone deny the actual existence of a daylight chocolate bath?

A long while ago I had a dream in which the "story" continued from night to the next, for three nights. It was spooky....
I can't remember any dreams lately, but there are some from the past that I still recall very vividly. One I turned into a story. Others are haunting me even now.
I suppose I should call it a nightmare:
I was at the window looking down at the swimming pool in my back yard, when a woman, wearing a black long evening dress, rose out of the water, extended an arm towards me, and tried grabbing my heart. I managed to push her away, but as I woke up, half-scared, it was as if I could physically feel her hold on my heart. Very very very strange. Was it some sort of heart attack I wonder?
Anyway, I like very much the pictures in your post - very beautiful, very suitable.

I think our dreams mostly reflect our state of mind, Vesper, yours sounds like it was full of fear - poor you!

I have a link somewhere for interpreting your freaky dreams - I'll try and find it.

Once, shortly after I awoke on a Saturday, I had the fortune to catch my five year old daughter as she was waking and she began telling me her dream. When I asked her about a detail she said, "You know, Daddy, you were there." It hit me like the coalescence of those 3d shapes within a jumble of colors so popular recently. I too had had the dream, but would never have remembered it without the matter of fact assurance to trigger it. She followed with details that I anticipated and filled in my own details with her confirmation. Very intriguingly wonderful.

Uncharted territory indeed, G&G. My spiritual side tends to lean towards the Astral Plane as explanation to a shared dream - not the first time I have heard of it.
No doubt before long technology will find a way to tap into the mysteries of the night and we will be able re-play the particularly good ones. As long as they are not made public it might be a good idea!

Thank you, John. You said that a recent poem of yours,'Bubbles', was inspired by a dream. I wonder how many of the great poets/writers nipped out of bed in the middle of the night to scribble down a thought before it faded off into the ether? Most of them, I suspect.

Putting sexy babes in posts always works! just personal opinion, great words along with the pictures. Dreams, the less said about them the better. I just hope they lead to saner waking times!

I think people like you were created to counteract the lack of productivitiy in the world created by people like me who don't really feel fully rested without a good 9-10 hours of sleep.

I love hearing about dreams. Some of yours sound downright delicious.

Who wishes to be sane, Nothingman?

I used to sleep a bit more but I find I write best at night, when the house is quiet and there are no distractions. I haven't got time to sleep!

I have been boycotting this post, as I do not have dreams erotica. (pout, pout. childish, yes)

No but I do spend plenty of time looking for the loo,
and driving in my car, trying to get somewhere, but the road always goes off in odd little ways.

I have had dreams that have been significant though, meaningful. But still really, if I could just grasp that crush, even just a finger tip brush, that would be just so wonderful. Even my dreams at attempting erotica, (with own husband) are much like dreams of searching for loo, have goal in mind, but can't get there, people always interrupting, doors wont lock, no free stalls. Have been told this means I have intimacy issues.

Yes well, why not save real life issues for day, and have a bit of fun in my sleep. ( I do so hope, my dreaming self takes your lead, and does not take Vesper's)

Very nice so artistic,the artwork is so mysterious.