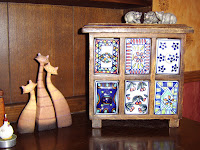 I have just visited a house where I was almost too scared to sit down. No, there was no vicious dog and as far as I am aware I do not have a case of raging hemorrhoids. In short I had found myself in a beige palace, a sanitised box where the fringes on the rug had been brushed at precisely the correct angle and the towels in the bathroom were folded like origami napkins in a posh restaurant (and she didn't even know I was coming!). The house was an altar to Homes and Gardens but I was strangely disturbed as I returned home, only just missing the newly laid catsick on the kitchen floor.
. 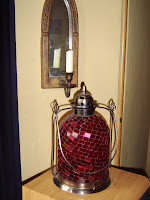 'You're weird.' Demanda said, arriving as if by magick as the kettle came to the boil. 'You wouldn't want a house like that, so why are you moaning?'
.
Demanda is a fully paid-up member of the Gin Co-op, she has known me and my house for years. I looked around as she kicked off her shoes and flopped down, spilling coffee down the side of my saggy leather sofa. She swished her foot about a bit to mop it up.
.
'Nothing matches,' I grumped 'and my towels would think I had gone mad if I asked them to do that origami restaurant thing, but why can't I be bit more, well, together.'
.
'Your house is you.' Demanda said, as she missed the ashtray by a good five inches 'I wouldn't come here if I thought you wanted me to be uncomfortable.'
. 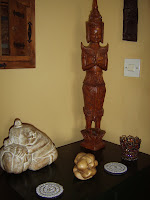 I looked at my eclectic room with its eclectic adornments. I suppose she's right, they don't come to see my messy towels and my unmatched rooms and they would all be horrified if I ever did beige. Come to that, so would I.
. 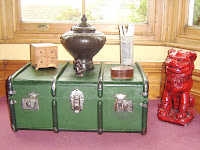 What beautiful rooms you have. They are both peaceful and dramatic!

No, I don't think you have a beige bone in your body.

You gotta come to my house - I wouldn't even go as far as saying it's a disorganised mess. It's just a mess.

Careful, dear, LMN said I had beige as the background colour on my blog! I see cream, off white. What do you see?

Roberta and Cailleach, that's really nice, but I have a disease. It's called
'KeepinglotsofthingsIlovearoundmeitis' - I think it's incurable. They will never put 'minimalist' on me headstone.

You look sort of clotted-cream to me on my screen, Shameless. Not beige, definitely not beige and a blog is different anyway.

This was a whole house experience, an overwhelming beigeness except for the cream cutains and the pink rubber gloves she had on when she answered the door (they mysteriously disappeared by the time we got to the kitchen - in some secret beige bin, no doubt).

Sorry Seamus, perhaps it's time to recalibrate the old triniton monitor and your digs may appear as 'clotted or coagulated?' cream.

As for cream interiors...yucky.
The same goes for 'autumn tonings' as mother in law would call such wishy washy 'safe' schemes.

Our surroundings SAY a great deal about us. I never want someone to think I'm safe!
I don't clean my windows because I like birds-without broken necks.
A little dust is good- it fortifies the immune system. The latest medical research states that our children have been mollycoddled to the detriment of their health. They NEED to eat dirt.
Intestinal parasites can help clean out a sluggish bowel, and without the clutter of books, objects...the general deritus of living where would all the spiders live?
Nope, don't want to live in a hospital, this loony noony likes to ponder the meaning of the objects that her friends choose to surround themselves with.

So true LM.
I love "I don't clean my windows because I like birds-without broken necks."
I'm feeling better now and I don't know what I'd do without all my well-loved things around me. I have just realised that me front room probably represents every religion and belief system in the known universe. I have also realised that in twenty-five years, apart from white goods, we have only ever bought five items of furniture from new. I think you could say we're 'lived in'.

You are also right about dust and dirt. A friend got told off by the doctor about her constantly sick children - they were too disenfected!

I would be hugely disappointed if your house were not full of mysterious ornaments, fertility symbols, wooden dolls and lots of witchy stuff.

I can spare you then, Mr B but I keep the broomstick out of sight under the stairs.

A question - why do they only make TV's in silver?

All of that just to tell us you're an untidy bit... I mean witch. Tsk! Writers!

I live in a horrible mess - you seem far more comfy - can I come to live with you? I hope that is not an urn in the last picture???

Dang! I'm going to miss you too.

PS. You are definately NOT the beige house type.

Nope, the Minx is definitely not a beige creature, not a chance! But I hope this doesn't mean I have to repaint the walls of the Hen House shocking pink - I find beige makes a good backdrop to an eclectic collection of stuff and, as such, beige notwithstanding, I doubt I'd make it to Homes & Gardens - oh woe is me - muahahahahahahaaa

I swept all the crap under the carpet years ago, Don, it is still lurking!

Yes, Mut, it is a Thai urn and the ashes of our dog are in it! Still wanna come and stay?

Oh L>t, don't stay away forever - I shall miss the philosophising!

Well, there you are Miss Chickadee and about time too. The blogosphere was getting very beige without you!

I confess, we have a beige house. Actually it is not exactly beige: "savannah" and "vanilla" to be precise (and will I be excused because they're ecos ecological paints?!). HOWEVER, we are neither bland nor minimalist. They're just good backdrop colours for lots of other vibrant stuff from everywhere we've ever lived. Am I forgiven? What beautiful rooms you have.

I once went mad and painted our bedroom red. It's still red. I believe in that same year, husband dear bought me an urn to put HIS ashes in for our anniversary.

Such a romantical guy!

I was joking about the urn Roberta, but don't tell Mutley!

Savannah and vanilla are fine Equiano, and it's not even beige as a single colour. This house WAS beige - carpets, sofa, cutains, walls and she had some ver' nice porcelain dogs on the faux mantelpiece - yurk!

Like LM, I love houses that reflect the owners, with inherited furniture and quirky objects that tell a story. Sorry if I have upset anyone!

Is beige the new magnolia?

Presume you are talking about me sister-in-laws glam palace, Debi. Take that, and multiply by a hundred - this was like living in the arctic.

Looking forward to you staying in the summer. I'll start cleaning now, shall I?


Btw, tell the boys to prepare themselves for a cake mission - I shall be kidnapping them, again!

A friend once described my living room as eclectic - she was trying to be nice, though. What she really meant was "nothing matches and it's bloody cluttered". Her home's minimalist, y'see, which is just a nice way of saying "cold and impersonal". Not a single plant grows there (green probably wouldn't match!) and there's no animal hair on the sofa. And guess what colour the walls are?

A home should, IMHO, reflect those who live in it. I have a busy mind, thus the clutter. But everything has a reason for being here, even the lumps of rock in front of the telly and the marble cat that's missing an ear. And as for the dust bunnies in the corner - hell, the dogs have gotta have something to chase!

Yes too much beige is nottasteful. It's just reminiscent of a toffee shop

Sharon Jacobsen, well bugger me!
Absolutely right - everything has a reason from the tin of my children's teeth and a feather I found just after me dad died.

Hi Bramblehead, at least you get some taste with toffee!