Could you think of anything better to do with a spare Saturday? 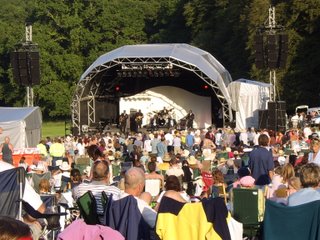 'Rock meets Blues in the Park' kicked off at Lanhydrock House, a seventeenth century stately home not far from where I live.
Not a cloud in the sky and temperatures that threatened even a factor 50 made this my favourite concert of the year (still got 'Muse' to go at The Eden Project yet).

Sounds better than Chessington World of Adventures, any day ;-)

Did I go somewhere? To tired and too hot to move a writing finger yesterday, will correct now....

I would lean towards a meltdown as my karma is perfectly intact, I think.
And if you have finished with the 'podding' Hovisboy, are you now ready for some witty repartee?