I suppose I shall have pull up the duvet now while the children fight it out for the future of my country.
My letterbox is already moaning under the onslaught of paper akin to a small rainforest (but thank you Mr Cameron and Mr Brown for your 'personal' letters to me. Mr Clegg, I am awaiting yours with anticipation - lazy git!).
After the first major TV debate, I am already sick of the posturing, the puffed chests and the thinly veiled insults. The political devotees are throwing meaningless figures at me, showing me graphs and charts that have more work done on them than a plastic surgeon would ever admit to.
With the Three Horsemen of the Apocalyse trading more and more pathetic insults I am beginning to wonder if we should just chuck them in a ring and let them punch it out - that would sort the men from the boys.
Perhaps a Political Deathmatch?
Gun fight at the Westminster Corral?
So, boys, come on. Stop fannying around with the 'my knob is bigger than yours' quotes - lets see some blood! 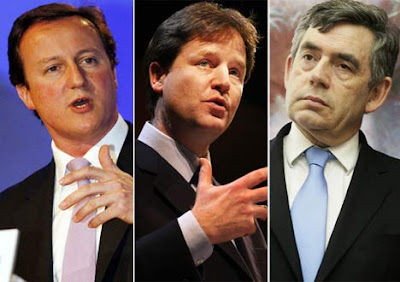 Gordon Brown refused to show his hand until the last possible moment!
Writed by Unknown at 9:07 am

The Lib Dems make me laugh. That party-political broadcast with all theillegal littering. I hope they picked it all up afterwards... Some years ago, someone did a sketch, or cartoon, in which after the LibDem leader had ended the party conference with the stirring cry "Go forth, and Prepare for Government!!!", the cartoonist corrected it "Go forth and prepare for leadership of the library committee".
Lets face it, the race is between Labour and Conservative. No matter what we would prefer, either Brown or Cameron will form the next government. I'd prefer Cameron, simply because I'm fed to the back teeth with the current clowns. I don't kid myself that he'd be much better though.
I suspect anyone with an ego big enough to want to be an M.P.

Not knowing anything about your politics...the one on the end looks like he was rode hard & put away wet.

Soub, this is the first time in my life of voting that I haven't got a clue which monkey to vote for-
The Glump, The Earnest Schoolboy or The Estate Agent?
They are all as bad as each other with a hairs breath between their policies - nothing will change.
A hung parliament sounds a good idea - I could provide the rope!!

Rita, our politics are are the same as yours only our politicians are uglier! Still laughing at 'rode hard and put away wet'!

Splutter splutter... rode hard and put away wet? What sick creature would choose to ride such a slimy slug?

I have an aversion to politics that became a lethal allergy.

They're all full of horse hockey if you ask me. :/


I wish you and your country the very best of luck. Good luck.

In the meantime, turn off the tube and go to a gin party. Much nicer.

It appears the same as we have here.
Sad really.

Soub, you've got to admit that was funny!

I am very tempted, Scarlett, but not voting would play on my conscience. Besides, not using my vote would mean not being able to moan about it. I am abstaining from all the TV crap though.

Yes, Mac, but your politicians have shiny, expensive, lying teeth whereas ours...

If the Tories give us the referendum to get out of Europe, i'm in!

I'm very glad to make you smile. You are the funny one, after all. :)

SouYou do know that saying refers to horses, right?

I'd vote myself out of Europe as well, John G, and off to some Caribbean-non-tax-paying-free-booze island for the rest of me days!!

Thanks, Rita.
Soub understands perfectly about being 'rode hard' - just not when it's connected with Mr Sexdog Brown!

Oh Minsk, what would an innocent like me know of all that equestrian stuff?
Though, at the age of eight I was quite the country gentleman, in my hacking jacket and jodhpurs, as I trotted along the country lanes, on Pippin.

This captcha stuff is getting to be a bit uncanny.
"buckedon", I ask you. Bucked off, a few times too, I can tell you.

You write really good articles, very attractive, I feel very shocked. I hope you can continue with your work, come on!

But, egads, maam!!
I must!!
I must tella youse
bout the Wonderfull Kingdome:
'the more you shall honor Me,
the more I shall bless you'
-the Infant Jesus of Prague