It had been a faithful molar but of late its armour had taken a few knocks, rocks and those nice hobnob biscuits with chocolate on one side. It could take no more.
The battle plan had been simple. An innocent meal with my sister, lubricated by some Tiger beer and sweet chilli sauce but lurking somewhere in the pak choi the enemy lay quietly until the last possible moment before revealing itself.
The first strike led to an "ouch, oh bugger!", but like all adrenalin filled battles the peanut damage was not revealed until the next day. Over a morning cup of tea the molar shed its little gold helmut and exposed the devastation underneath.
The voice on the end of a frantic phone call said that help was not at hand until Tuesday morning but the little molar was not going quietly.
After the discovery that the toothfairy was held up in Bratislava and that no strong painkiller, whiskey or illegal substance was going to put the wounded tooth out of its misery, a string and a door knob were considered.
"You have fractured the root, it must come out. That will be £54, do you have a credit card?" the Evil Dentist smirked.
The little molar battled against the pliers for half an hour - how brave it was! The empty grave is still reminding me of its struggle.
RIP little toothypeg - you served me well but would you please have a word with your neighbours and inform them that there is no need to put up quite such a struggle as modern medicine, and a loan big enough for a new house, will allow the Evil Dentist to fill the graveyard with a fake tooth that will last until 3010! 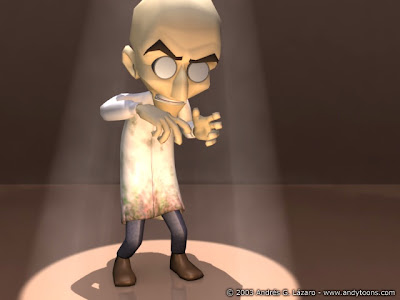 I've always been lucky with my teeth. I have a decent set of choppers. They're straight and fairly white.

That's a good thing because I fear dentists. I haven't been to one since 1986. I know, at some point, I'll have to go. I'll burn that bridge when I come to it.

Hope you kept the wee golden helmut fer a souvenir. Summat to show the grandkids as reminisce about the battle.

Oh Mac, my teeth are delicate like glass (about the only thing that is delicate!). I look after them more than most but every now and again...trouble!!

Helen, I am embarrassed to say that I ate the little helmut. It shot down my throat before I had a chance to say "oi! Get back where you belong"

Oh dear, Minsk, that is a nasty occurrence, as I know all too well. I think mine as occasioned by a bit of unexpected bone lurking in the curry. And the tooth that had been protected by a lump of gold, once, but had been re-filled a couple of years back by a dentist who I'd like to thump.... crunched. Three pieces, and a jagged stump.
My new dentist was prepared to do the job next morning, though, and she did it almost painlessly!
It occurs to me that the evil previous dentist probably made a nice profit mining his patients for gold, and failing to mention that he's replaced it with a lesser material.

At least you'll have had semi-precious-poo!

Semi-precious poo! Giggling like a loon (a toothless loon)

I hope you are feeling better, and I am SO glad to see you back on here again!

Thanks, Scarlett, good to link up here again. Facebook just ain't the same!

Cozier? I don't know, but I missed this place, too.

Losing a tooth in a burger fight is sad. Amazingly handled it like a jam on a peanut spread. I am in Edge water, New Jersey. Cosmetic dentistry sign is bannering to flatter my ever-flattered eyes. Typing this in my hometown while eating my favorite Jersey burger and reading your post shifts my boring morning into a throttling one. I was beguiled by your words. Brit jargons are flying like handkerchief on a parade. I like it. It brought me back to my Manchester days. I learned my first football skills there, lost my childhood sweetheart (awww..), and detached from my first ever grown tooth in a Liverpoolesque nursery. Kind of connected, I lost my tooth because of football, and my childhood sweetheart hated me because I was a toothless (yet cute) kid, and in result, numerous visits to lots of dentists. Edgewater is just like Manchester for me, full of memories and full of life. Moving from there to here isn't bad at all, at least, I learned a lot ── football and childish funny heartaches.

20 points for the most inventive spam yet!

how come you did not delete it? I mean the Spam?