He has many names, some are too rude to mention and some are just plain silly. He was named 'Owen' after my dad but after that there is no real resemblance.

His demanding ways drive us all mad and his desperate cries can be heard from one end of the house to the other. He is a cat that thinks he is human (or is it the other way around?).
Over the last five years he has acquired his own furniture, soft furnishings, beds and bowls. If we ever got divorced I have no doubt he would sue me for catimony.

Should a pet be a pet, should he know his place and live around us? He cries and we answer with tasty dishes and a ready warmed lap. He is arrogant, lazy and keeps his nails manicured on the best chairs. He sits on people who don't like cats, turns his nose up at fresh chicken and would not be seen dead without the latest designer collar. When he's in he wants to be out and when he's out he will cry at every window until someone lets him in and he can spoil a dinner party with one lick of his balls.

Has this creature any redeeming features? Are we giving house room to Beelzebub's son, a feline usurper, a cat burglar?
No. This son of Bast has chosen us to be his family and he loves us. I could not imagine a cold night without him warming my toes, a sunny day when he stretches perfectly in the sun or a time when he has not known when I am upset and need some fur to cry into.
Strangely we belong together. 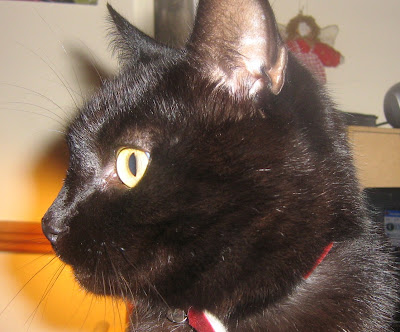 And yes, of course he is black - did you expect any other?
Writed by Unknown at 6:11 pm

Such a good boy!

All said and done, niceness isn't what we love them for. But I'm one of those who believe a cat heart can beat with proper (animal) love - and every witch should surely have one.

I saw an interesting TV program on the frontal lobe of Mammals where most of the thinkin and memory activity is organised.

Turns out that Dogs have a bit and Cats, well not-so-much. The presenter hypothesized that this is partially why the two species are so different.

Dogs of course wait by the door in anticipation and even when you just run and take out the garbage they greet you as if you'd been gone for five weeks!
LOVE ME LOVE ME LOVE ME!!

Most Cats on the other hand, sort of notice that you entered their space and may or may not glance at you...
and you are??? and this would be regarding???

Of course I am exagerrating a smidge. The coolest point that he made was that Cats don't dwell on past transgressions or waste their days dreaming of a better tomorrow..

Cats live in the NOW

I came in with such a brilliant comment, read Donn's, and now my mind is completely blank.
So.,...ummmm....

When I am feeling really mean, Leslie, I let him stay on their lap for a while.

Yep, can't do without my familiar, Signs, he's adorable.

Don, if dogs are so smart then how come my couldn't wash himself, feed himself or take himself for a walk?
You are not exaggerating and yes, absolutely, cats live in the moment - is there anywhere else to live?

I was just about to write "Yep, up the pussies", Elaine, but suddenly realised it was far to risque.

Cats remind us that affection isn't a commodity. The best pussy in life is free.

HI, he agrees that she is gorgeous but has reminded me of the barbaric procedure that I had the local vet perform that put a stop to his shenanigans with the opposite sex. He will never forgive me.

Absolutely right, Yoodood (winx), a cat chooses to love whereas a dog can be bribed.

Oh he is what he is and you love him to bits. Sure where would you be without your familiar? I do love cats and the way they look down their noses at us humans - well, someone has to!

I lost my familiar 6 years ago and still grieve for her. She loved me best and hated husband with a white passion. She took every opportunity to devil him. (Once went as far as to pee in his kayak).

Ahh I miss her. Her name was Worthy. (she was)

Roberta,
"Pee in your kayak" is now my new euphemism.

you know ... i'm pausing here attempting to comment ... and have discovered that i left my brain out in the gutter ....

damn, everytime i try to add something, it gets so... lasciviously twisted .....

It was all about 'im bein' 'ard, that son of Bast.

He's gorgeous. I miss having a cat so much, but I guess now is not the right time to have one.

Don't be fooled by his exotic looks and his wiley ways - he is a bast really.