Her majesty the Queen of Marbles 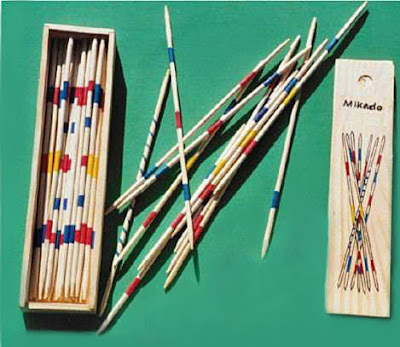 "So what are they?" he asked, looking at me as if I had gone mad. What could I possibly be offering that would take his mind away from the Playstation or the latest violence infested DVD?

"A game from the ancient times, a game of stealth and cunning, order out of chaos and look, no electricity needed."

"Didn't you have a TV?" he asked after I had peeled him away from the modern world with a box of small spears.

I resisted the urge to smack him across the head (illegal and not very pleasant) and proceeded to show him my rusty skills with a box of Spillikins.
An hour later we were still playing and he was beating me. We moved on to marbles... 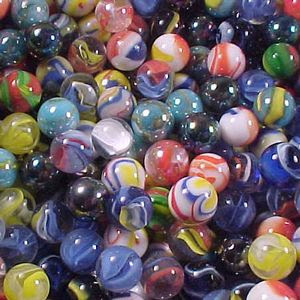 and then to a game of Jacks where I found I still reigned supreme in the playground!

For two hours I had painfully extracted an eight-year-old from the confines of modern entertainment - I was feeling a bit smug and pleased that I still had mastery over some the games from my childhood.
When did we stop playing all these wonderful games and where did we get the idea that the isolated modern games that kids play are good for them?

Tomorrow he wants to learn Chinese Chequers. I think I shall be staying up all night to practice. 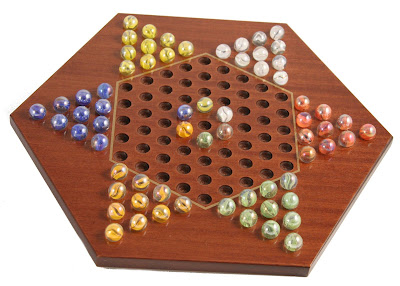 Glad to see you up to mischief once again. The pick-up-sticks, marbles and jacks are wonderful games, beneficial to hand, eye, strategy exercise, but beware of the Chinese Checkers introduction. Once you switch to board games you diminish the dexterity element and enhance the strategy which has led to a bunch of lumps with muscular thumbs to punch buttons who can no longer catch a ball not made of pixels or go to a store without a mouse. The Sta-puff generation is upon us it seems. My fingers are getting pretty strong while my body loses its battle with gravity. Good on you for your reinvigoration of more full body contact with life.

We had another subversive way of retaining the fun of play while eschewing the usual materialism.

You know those ghastly cards that they pay a fortune for and that usually contain duplicates of ones they already have and no one wants to swap? We did the same - with bottle tops.

Utilised hunter-gatherer skills to find them, cheered when we found a 'rare' one, cost nothing, no environmental ramifications (in fact we were clearing and recycling) ... but alas, we couldn't motivate any other kids to join in so we couldn't do swaps.

This is priceless, Minx.

Yay for old-fashioned games! Teach him chess and cards and you'll have the full set!

Introducing Chinese Chequers will not lead to anything more sinister than another lovely board game, Yodood. This tactile tactical game has never given me an urge to lop off zombies heads with a chainsaw on the Xbox!

Ah, yes, Debi, the horrors of the greed inducing Pokemon and Yu Gio cards are well known to my very hip self but I caused a minor riot a while ago by suggesting that the kids could make their own top trumps cards. I thought it was a brilliant idea.

Funnily enough, Leslie, most of these games are nearly priceless. I bought the jacks for about 50p and found the Spillikins in a charity shop!

They are, John G, what did you play?

Skipping, Babs, skipping is where it's at, along with 5 stones, Nine Men's Morris, Stick in the Mud, Leapfrog....

Hell love "Mumblety-Peg"- we play it with bowie Knives here in Texas, but you guys probably just want to use Butter/Jam Knives.
If it looks like I might lose, I always go for the Default Win and bury the knife into my own foot...but not everyone can be that tough...or stupid.

Oh, Split the Kipper is pretty good too and sounds bloody british too!
http://strange-games.blogspot.com/2007/10/split-kipper-strange-games-with-knives.html

Well, thank you, Bullets, I spent a delightful hour perusing the delights of the 'Strange Games' blog! I still don't get the Mumblety thing - please put me out of my misery.

So that's what spillikins are. I remember reading about them in a book when I was a child and wondering what they were. Oh yeah, we had them here, we called the game "Pick up Sticks"!

Now, how about a game of dominoes?

Also known as 'Jack Straws' Vanilli. I guess Jenga is the same sort of game but a little more ordered.

ccMumblety peg, also known as mumblepeg and mumble-the-peg, is an old game generally played between two people with the aid of a pocket knife. In one version of the game, two opponents stand opposite one another with their feet shoulder-width apart. The first player then takes the knife and throws it to "stick" in the ground as near his own foot as possible. The second player then repeats the process. Whichever player "sticks" the knife closest to his own foot wins the game.

If a player "sticks" the knife in his own foot, he wins the game by default, although few players find this option appealing because of the possibility of bodily harm.

HERES ANOTHER VARIATION, this is the one for toddlers and children under 4 years of age, and women...
http://www.inquiry.net/outdoor/games/beard/mumbly_peg.htm

Its safer than the other one, so its not as much fun.

I played most of them!

I am now practising for the Mumblety Olympics, Bullets - ouch!

Without televisual entertainment we were quite an inventive lot, weren't we, John G? I can't ever remember being indoors.

I love jacks and spillikins. I lost my marbles ages ago. Well somebody had to say it - and in my case it's absolutely true.

Oh I remember Pick-Up-Sticks. Jacks appalled me, but a good game of HopSkotch did not! I adore sidewalk chalk and remember Chinese Checkers and cards!

My children remember the more fundamental games of "Memory" and other games they told us to play with them...which we did...

...I think something was lost in the game.

Well, so I just took a brief tutorial via wikipedia for 9 Man Morris.
Similar to "go", the chinese takes-longer-than-monopoly game, but fewer pieces.
I had never heard of it before. Those pesky Romans...

And ha ha about the 'pricelss' reference. You are a clever Minx.

Losing one's marbles is the prerogative of the extremely smart and sassy, Signs - welcome to the club!

Ah yes, Roberta, Hopscotch - the jumpy, stoney thingy - wonder if I could still do it?

I have a wooden version of this game, Leslie, and I think it is also called 'Merrels' or 'Merrils'. Debi has a beautiful set of Mancala (Chon-Ka) - these games are more like ornaments that family games.

And its the conker season as well!!! You can get days from that alone...

My boys--who are too sophisticated to ever admit it; love it when we have power outages. we spend the time hunched over boardgames and a battered deck of cards by the flickering lights of cheap white candles

I challenge you, Muts, I have a 'sixer'.

It just ain't cool, Noony, to be seen to having a liking for all that stuff from the dark ages. Beetle Drive anyone?

Did someone say conkers?

(Sorry - you never have taught me how to do that clever linky thingy in comments.)

Minx, I have nominated Inner Minx for the I Love Your Blog Award. :-)

Please visit my blog and see.

Totally agree with your post, Minx. When just about 6, my niece I helped raise when my sister died, loved board games. (So do I) When the cerebral infiltraion of video games and puter games became so predominate, Huh? *laughing* What did I just post! the cerebral infiltration! Yikes! Had too much spaghetti! anyway, I agree!

Oh yes, I member that one, was it two years ago, Debi?

Btw, to create a link to Debi Alper write it like this...

Cerebellumm Infiltaiontion is often caused by an over indulgence of spaghetti, Petra.

Laughing about it is a symptom as well - see a doctor, Petra!

Loved all those old games! I'm such a 50's kid! Life was sim[ler amd perhaps more fun then. We were lucky!

How about Jumpsies with all those elastics joined together? Well, I never actually took the time to hook them all together!

Elastics - we called it French Skipping here, Mother, and found that the making of the 'lastic' took up more time than the game itself!
Simple and good.