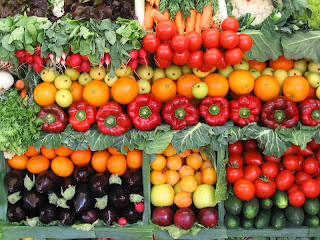 The other day, while tucking into a mixed salad for lunch, one of the children I work with pointed at a red pepper and said 'Ugh, I hate them'. As he stuffed another chocolate biscuit in his mouth he went on to list a hate of most vegetables. 'Does your mum cook them at home?' I asked.
'No.' he said 'She doesn't like them.' 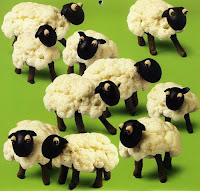 So how much do we influence our children's eating habits? I looked to my own family. With two meat-eaters and two veggies I suppose we are exposed to a variety of foods everyday. I have only consciously deprived them of parsnips and prunes (I blame that one on school dinners). Other than that, between us, we eat most of the world's garden.
I am not righteous about food, my vegetarian habits come from a stomach that cannot cope with meat rather than moral issues. I do, however, try and provide a healthy balance. I steer clear of meat that doesn't look like meat, preservatives, enhancers, colours, or stuff that makes yer bread last for a month (Saint Minx!). 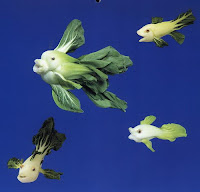 The Feckers made their own names for veg - trees = broccoli, naked trees = cauliflower, fart bombs = sprouts, grass = cress. They didn't like mushrooms until they were in their teens but I never told them that they didn't like them, only that they hadn't grown into them yet. I also assured them that they liked everything (I had no time for fads) and that chocolate was a vegetable! 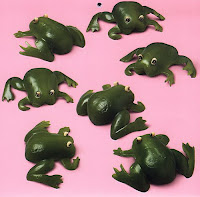 So my theory of a healthy eating regime for your children is... tell them lies.

Now, shut up, sit up, and eat your pepperfrogs.

Nice post! I went to the link...and only have one question.

The voracious appetites and endless curiosity of the young are the root cause of parent's reliance on the convenience of pre-processed junk food for size of the body and televised junk answers for the whys of the mind. No wonder parents don't know where their kids pick up stuff.

Chocolate is not a vegetable?

Maybe we should kill McDonalds, G&G, it would be a start.

Chocolate comes from beans, which are vegetables, John G. I believe in the holy bean.

I am never eating green peppers again - they might jump off my plate and run away.
See what you've done now!

I'm the most irresponsible mother in the universe. I don't eat anything vegetable-like except green beans and lettuce with the occasional pea...but my children were served everything. When they complained I explained that I had eaten that (insert vegetable here) for the first 18 years of my life and now they must too.

I suppose a fruitarian would agree totally with you, Vanilli. If the pepper wants to run away, then it shouldn't be eaten!

I think I have a recipe somewhere for lettuce, green bean and pea cakes, Kat! Don't beat yourself up, at least your kids know what a vegetable is.

I'm a non-carnivore but don't know whether I could eat a cauliflower ear ... Please advise, oh wise one.

I can remember my mum telling my sister, always be careful of anyone who eats, shoots, and leaves

Good to hear from you. I'm wondering if all those animal sculpted veggies is actually a marketing ploy by the meat industry to encourage children to become carnivores?!

I'm with you on the whole food and children thing, although we only have one daughter. Once her mama's milk run out after a year she staretd to eat what we ate, mashed at first, etc. She never questioned anything on her plate and always ate everything - till she started having lunch at nursery with other children ... some of whom may just have been indulged in fussyness, fads, and the like!!

She's gotten more particular (fussy)... and so the deception (lies) have started!! Cajoling is the name of the game at times - although she is adamant she doesn't like, and refuses to eat, of all things, mushrooms!!

Cauliflower ears are just the same as broccoli tails, Debi, as well you know.

'Still reeling' refers to a comment I made on a very interesting post on David's blog. The strangest, most thought provoking stories can be found on a train journey. Pop over and see what you think.

I think I'm vegetarian because I was overloaded with meat when I was growing up in NZ. At one point it was meat at breakfast (mince on toast), lunch and dinner. All those lambs! Vegetables were my saviours. :-)

Mince on toast, Shameless? Ugh! I wouldn't move for the day.
It is interesting, though, how different nationalities and cultures view eating habits and how we view each other. Roast beef and Yorkshire pud anyone?

Minx, I've just been looking at a weight-reducing diet book and as far as I can see, all you are supposed to eat is meat and fat. A bit of veg later, if you're good. I can't deny that the being of Signs could do with a bit of lightening, but the thought makes me heave - even though I like meat. I don't know why I felt moved to share this but heigh ho. My kids eat everything and always have, don't know where I went right, just luck I think.

Signs, you could probably lose weight by replacing each meal with a couple of Mars bars. Skinny you may be but not very healthy, eh?
Humans are scavengers, keeping the body in a state of nutritional surprise is the key. Don't let it know what's coming and then it can't plan to store it all on yer hips.

Your kids must have been talking to my kids! My ones have always loved getting 'trees' on their dinner plates.

Yes, I believe in lying to them too. I grate up carrots so that the one who doesn't 'like' them doesn't notice them. And mushrooms are chopped up so small they don't look (or taste) like 'em but they never notice!

Lies, I should try that.

My husband I were veg for the first 8 years of my son's life, sorry to say it had no positive effect on his food habits.
Whenever I force him to eat veg, he throws it up on his plate.
We only eat the same foods for any given meal on occasion. Sadly sometimes, we each eat something totally different.

Force feeding has that effect, Taff! I can't be doing with a hundred different dishes at mealtimes - my way, or the bin!

Lying is good! It was quite a few years before I found out that the jam tarts my mum made were from her homemade gooseberry jam and not strawberry as she let us believe!