Sweary Mary and the art of vulgar conversation 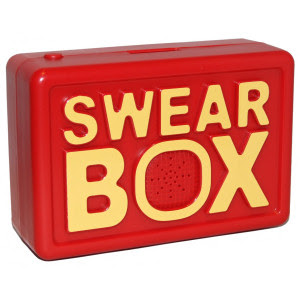 My mother once threatened to wash my mouth out with soap if I used the word 'twat' once more at the dinner table. It was her pet hate, but she was quite happy to refer to something as being a load of bollocks.

Funny, isn't it, that some words can really grate on your 'norm' nerves and the use of certain words are enough to make some people tut and raise their virtuous eyebrows. These words are often considered common, used by members of the population who don't know any better - heh! This is completely wrong, the landed classes are far more foul mouthed that their terrace living counterparts - a friend once worked as a nanny for Lady Wossname and was often told to "Feck orf" if she had done something to displease her boss.

My love of language includes the creative use of certain words, but can these words actually be called foul? I suppose that depends if the profanity is directed at someone. I once let go of a well timed 'Oh shite' during a meeting at work. It was politely ignored because I had just spilled hot coffee down me front. Had I said "That idea is complete shite, you are talking through yer ass" I would understand if it was considered offensive.

In a time when new words are lining up to be included in the latest version of the OED, is it surprising that our expletives have changed very little over the years. The versatile 'fuck' was first seen loitering about in a poem in 1475. Today it is probably one of the most widely used oaths, so can it truly be called offensive - it is after all only a word?

I would recommend swearing, whether in public or in front of the bathroom mirror, for a number of reasons:-
Practice often and if you can't bring yourself to let one go out loud then go HERE and let your tensions just melt off into the lovely, lovely sunset.

Love and light and a bit a swearing does you good!
Writed by Unknown at 5:08 pm

my boyfriend is being a right twat today.

and i mean it!

I remember my youngest brother explaining to my 70 year old mom that the word "FUCK" was the best used word in the world. It could be used and a verb, noun, adverb, pronoun, and adjective.

"The fuck you say!" replied my mother.

The "C" word drives me crazy. It can be used as a noun only. And what kind of cunt would use it?

We know you mean it, Zoe, there is a whole book about him and what a source of inspiration he is. Is he still on the sofa? Men are such poor helpless things when they have a cold.

Roberta, I am not prone to spitting coffee all over my keyboard, but that comment will go down in me archives. Still laughing!!!!

well...i wake up in morning and swear loud and proud, clears up the vocal chords and big fun too. the world can go and fuck itself for the rest of the day :D

I am glad you are clearing your pipes in the morning, Nothingman. I suspect there would be less road rage if we got the oaths out of the way over tea and toast.

What I am asking is why these words became 'swear' words? Why do so many people seem to need them?

J.D Salinger's 'Catcher in the Rye' was once banned for the use of 'Goddamn'. This blaspheme is almost understandable from the religious point of view, but most profanities have no connection with the church.

Aside from those with obvious sexual connotations why is society on its high horse about words like 'bloody'? Pure fuckery if you ask me.

I agree,
What does one do when one drops something on one's foot,
or drops one's dinner on the floor,
or when one burns oneself,
if one can not swear?

How would I ever get any where if I couldn't?
For it seems to be an inherent part of the process of driving a car.

I think we are allowed to say bloody quite freely here. Sucks seems to be a bit on the fence, some considering it to be a swear "That sucks!" and some not.
( I keep telling my son it is a swear word, and he keeps telling me "everyone everywhere says it all the time", even on kids programming and that therefore I am wrong).
Freaking falls into the same category.

I really don't understand why "oh, hell" is considered swearing.

Yours is a question of interest, why are some things swear words (what makes them so)?

Poop, poo, and feces are not swear words, but shit and crap are. Pee is fine (probably a much nicer thing to do than unrinating), pis is considered crude but not swearing (at least not where I live).

I also imagine some words, like the F word, are universal swears, and others are considered swear words only regionally, or nationally.

Maybe for fun you could invent one of your own, and see how far you could spread it. Inspiring bloggers to work it into one of their posts, and others to say it in their daily language. A bit of a Minx international imaginary (fictional) swear word day.

Well fuck me! I didn't think I'd feel better after saying twatcuntbollickywanker !

I also remember the funny story of the Dutch businesswoman whose workmates in London told her that fucking was another word for very, not knowing that she was seeking the advice for a speech she was writing for the company's shareholders. It went down like a bomb! "It's a fucking good year". This is a true story, and she later got promoted!

One tries to remember to use 'Oh spit' and 'poot' in polite company, Taff.
I am also well aware that I am turned off by compulsive swearing so I try to keep mine to an effective minimum but International Swear Day sounds like a load of lovely, cussbundary fun to me.

I think that was a piece of therapeutic swearity there, John G!

Considering sin is perceived by prudes who live in fear that anyone is having more fun than they, every pleasure a Puritan denies becomes juicy fecundity with which to rile their collywobbles.

The latest curse word, suck, is born of homophobia from those who demand everyone check the same box in the multiple possibilities of our natural bisexuality they did, puritans not required here.

Great post, especially your comment about the effectiveness of the well placed curse word is inversely proportional to its frequency. I was thirty two before I let myself say more than damn or hell in mixed company, about the same time I let my hair get longer than a quarter inch for the first time.

We don't use the word 'suck' as much over here G&G, and that one annoys me intensely.
Your last comment made me laugh. When I was just twenty-one and moving into our first house, the MD had done something dreadful which forced me to yell 'fuck off' at him down the garden path. My neighbour said months later that that was the first time he had ever heard a woman use the word. I should have been embarrassed but I wasn't, the MD was being a twat!

I'm always fucking swearing. My mum told me recently that she hates it so I just swear in Swedish and Finnish now so she doesn't have to hear "Fucking Hell" or "For Fuck's Sake" for the millionth time.

By the way, I don't actually swear at my mum, it's just that I've noticed these words slipping into most of my sentences these days. I know it's bad, but I can't help it.

Swearing is an art form in my view and I do it a lot I guess. I think I should be considered an artist ... not just a piss artist.

i love this! i have a couple favourite bad words. i use them lovingly and generously. ;)

*blushing*
You know when parents say their little darlings pick up their foul mouths from other kids at school ....?

I quite agree.
They do come in handy on a regular basis.

A little one told me once that I owed her a quarter when I said a word, and a dollar for another word I used shortly thereafter... I finally just turned to her and said, "Look, if I give you $20 can we call it good for the day?"

Thanks for the Minxy permission and encouragement.

Marie, that opener is a classic!

Muts, you an artist, an artiste profane. I said so.

Vesper, have a word with Debi, will you? Debi, of course, never swears, no never - hahahahahahaha!!

I am not giving you permission, Scarlett, and you obviously don't need any encouragement (you can do that all by yourself with knobs on) but will someone please tell me why swear words are swear words.

twat is my swear word of choice. with the wide range of meaning, (which you gave once upon a not so long ago time), I can use it freely. even allow the 'older' kids to get away with it.

And thanks all of you for the laugh. it really was fun. btw, i recently wrote my first expletive in a short story. the woman's husband had just been shot. and i felt...liberated ;)

Spot on, Saaleha, twat is a very versatile word and well done on getting swearily liberated. Popped my cherry years ago, there is something very satisfying about writing them down - twat, twat, twat!

sweary box sound interesting,this is for?