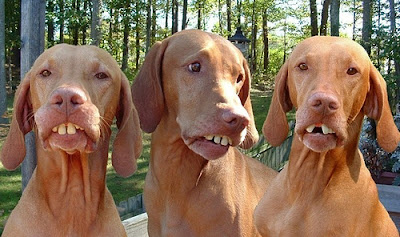 It was a shame nobody wanted to book the Beverley Sisters any more, but the general opinion was they'd gone to the dogs.

What does she mean we're getting long in the tooth, Rudy?

So that's where Greg's teeth went ...

"Freeze - someone has spotted us talking!"

Esther Rantzen's changed, and I didn't know she was a triplet!

"OK, which one of you bitches touched my bum?"

Shit, Minx,I don't fancy mine much!!

Yep, crazy pic. You don't think it was photoshopped, do you?

Hello, Inner Minx. A lurker here, one who has tagged you (explanation on my blog).

Apologies (and a curtsy)

Curtsey acknowledged dark mellifluoism but no. No mememe of the '8 things' 'cause I wrote it ten times or more.
It's about to be writ again
As I ask you to focus on

Sailors
Fighting in the dance hall.
Oh man!
Look at those cavemen go.
It's the freakiest show.

can't think of one. still laughing too hard.

Says middle dog to dog on right: "And who's your orthodontist, Maud?"
Dog on left thinks: "Whoever he is, I'd sue."

Just as an aside - there seems to be am international/regional food fight going on on the post below. Please feel free to chuck yer best at Debi who has her mouth open.....

How could you tell we was related?

By the way, I love your new Audrey Hepburn!:-)

Every dog has his day and I think we 've probly had ours..

(Sorry not to have been about lately Minx but normal service resuming..)

Oh look, and there's the culprit. John, everyone is admiring your finger, that is - Aud's finger. I am still tickled with the Merkan 'flipping the bird'. Why the bird and why flip it?

To clear up this little mystery we have to return to Agincourt. The French, who were overwhelmingly favored to win the battle, threatened to cut a certain body part off of all captured English soldiers so that they could never fight again. The body part in question was, of course, the middle finger, without which it is impossible to draw the renowned English longbow. This famous weapon was made of the native English yew tree, and so the act of drawing the longbow was known as "plucking yew". Thus, when the victorious English waved their middle fingers at the defeated French, they said, "See, we can still pluck yew! PLUCK YEW!"

Over the years some 'folk etymologies' have grown up around this symbolic gesture. Since "pluck yew" is rather difficult to say (like "pleasant mother pheasant plucker", which is who you had to go to for the feathers used on the arrows), the difficult consonant cluster at the beginning has gradually changed to a labiodental fricative 'f', and thus the words often used in conjunction with the one-finger-salute are mistakenly thought to have something to do with an intimate encounter. It is also because of the pheasant feathers on the arrows that the symbolic gesture is known as "flipping the bird".

I hope this helps.

Pluck yew? I am loving that.