Jack Vettriano is one of my favourite contemporary artists. Condemned by many as being too unimaginative, and even vulgar, he manages to capture a timeless era when women were women and men were mostly butlers! 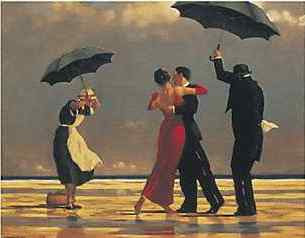 Born in Fife, Scotland in 1941, he took up painting in his twenties after a girlfriend gave him a set of watercolours. It was not until his mid-forties that Vettriano came to the fore and he went on to become one of the most commercially successful artists that Britain has produced. Jack Nicholson and Terrence Conran are two of his biggest collectors and the original below sold for £98,000. 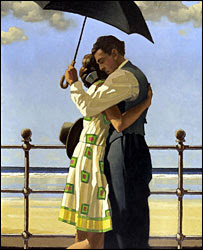 
In an artworld teeming with un-made beds and pickled cows, can we honestly dismiss Vettriano's work as vulgar....... 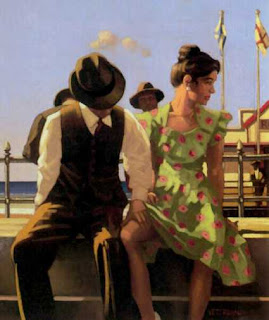 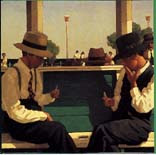 ...and his women, the wistful, thoughtfulness that we can all find within. 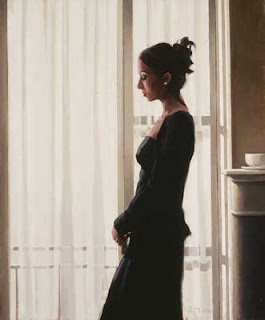 Whatever your opinion on art, isn't it nice to find something that makes you feel....... 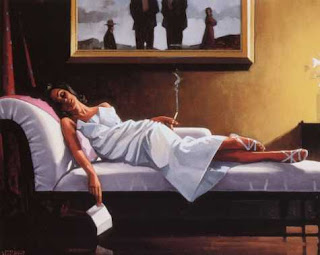 Those are splendid pictures, nothing vulgar about them at all. Chanting football fans are vulgar - as are fart sniffers.

these pictures are like old movie memories :) which is very nice...

Luis Royo or frank piccni do the trick for me after a tired day...

I say...who put those vulgar pictures on your blog?

Aren't they, GB? There are a few more that are a bit risque (check out 'game on') but I would assume that by vulgar they are meaning his style.

Nothingman - I have used a Luis Roya pic on me blog back along- nice style with a little dark in yer darkness! I had to look up Frank Piccni but couldn't find a sausage. Tell me more.

I love them John G, they sum up all sorts of emotive things for me.

I could put up worse, Jon, (and probably have) and it wasn't me - it was the gorilla.

Actually, they are quite tasty (the pictures, not gorilla farts). I learn more evry day! :-)

Forgive me Minx, for pointing out the obvious... but I am a HUGE fan of Vettriano... hence my avatar "In thoughts of you".
I have the first painting you've shared... "The singing butler", hanging above my bed, and "Dance me to the end of love" on another wall in my bedroom.

In "The singing butler" I see this:

There is a monstrous storm approaching, the wind is whipping everything about and the tides are going to come in... but the lovely couple keep dancing, oblivious to the storm and everything around them... seeing only each other, in their own time and place, untouched by that which rages outside of them.

This is how a romantic love between two people should be.

I also love that they are in formal attire yet she is barefoot on the beach... elegance and simplicity bound together beautifully. Her red gown speaks volumes of passion and life to me.

It is my favorite piece of art work that I own, and I have some excellent pieces from many eras and genres.

Can I thank you enough for posting this and bringing it to light? Hardly... but I will try.
Thank you, lady... thank you again.

Learning too, Jon, every minute. And it probably wasn't Gorilla Bananas, he has lovely manners.

Scarlett, this was a poem I posted last July and was inspired by 'Dance me to the end of love'.

Sweep aside veiled amusement allowing
those gentle teeth to bite down upon a neck
that surrenders to the misery of bliss.
We could dance to the point of it all
ignoring those best remembered lies
laughing at those without the light but
fervid is the wind that sobers
sour is the pill of truth
This septic heart is better than no heart at all

Brush away doubting thoughts allowing
those strong hands to cup this face
that hides from the hell of refutation
The tiger will not leave the building,
dancing his tormented tango as you
wrap me in the cotton of your words and
take me home to where I think I should be

That is very beautiful.
Thank you so much for putting it up for me!

Hi, just me L>T in my latest guise.

Something clean & well balanced about these pictures, uncluttered. The best kind.

WS, still finding my way with poetry - but still.


(Whispers)Tarty! You bugger! Still in the ether then? Hoping you are going to dig out that old blog of yours again, dust it off and get back in the driving seat. You is missed.

These are lovely. I am completely lost on how someone could call these vulgar or -- even worse -- unimaginative. Goodness. He does paint "of a time" but in a way that goes beyond that, a timeless quality, very emotive and dreamlike.

"Embracing" is quite lovely, as is "Beautiful Dreamer."

Thanks for sharing, Ms Minx.

Nice pics. Not vulgar at all.

I feel kinda silly to keep saying good-bye then coming back. *sheesh*

I really did have the computer all but stored away, then this community issue came, & i jumped into the fray. (that isn't really like me, but I see a noble cause that appeals to my humanist side) It's become pretty time comsumming & my neurons are keeping busy.

In the meantime I'll come visit once in a while for fun & giggles. :)

BTW, your last "guest" post was great fun to read!

Me too, fan of these, Minx!

Mr Thomas and Marie, no, not vulgar at all (oh I do love that word, vulgar, vulgar, vulgar). As I said, some of his work is a little saucy but style and attitude are as far from vulgarity as you can get. Having recently trudged around the Tate St Ives, I failed to find one piece that stirred me loins.

Hope you find some fun here, Tartypants - 'serious' does not come easily on this blog.

Shameless, I realise that you are incredibly busy with your new pride but please try and manage more than six words, please? I am feeling a little neglected!

I tried to look at your pictures from school and they were blocked by our 'naughty filter' so they must be naughty!
But then we all must be naughty some times!

I think they are great Ms Minx - I know all these works very well.. what a clever man and a talented performer. 10out of 10. Superb.

My filters at school won't even let me blog let alone look at sauciness! I trust you looked them up when you got home, Jon.

Oh Mut, you hopped in before me. Yes, love his work, dahling!

They are vulgar wisps of meaningless fluff.

Evening, Mr Pooper, of course JV doesn't compare with your own fine works! Glad to see you out and about even if you are leaving poopy comments.

Nice art this is best way of expressing.