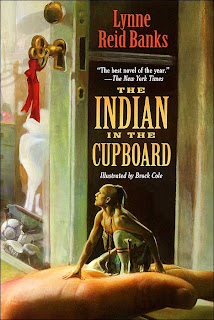 After reading Pundy's list of favourite books he'd read as a child, I went off in search of my own reading roots. I cut the list back to ten because they would have taken up the whole blog!

7. The Wind on the Moon - Eric Linklater

10. The Indian in the Cupboard - Lynne Reid Banks

This was a great exercise and I remembered all sorts of things that had been buried at the back of my reading memories - Flat Stanley, a cat called Charbonnel (?) , the Bears of Berne many of which I couldn't track down.

I still often read children's books. Terry Pratchett is a favourite, David Almond and Philip Pullman, but the best children's book I have read for years and years is Mortal Engines by Philip Reeve. Here's an excerpt -

It was a dark, blustery afternoon in spring, and the city of London was chasing a small mining town across the dried-out bed of the old North Sea.

In happier times, London would never have bothered with such feeble prey. The great Traction City had once spent its days hunting for bigger towns that this, ranging north as far as the edges of the Ice Waste and south to the shores of the Mediterranean. But lately prey of any kind had started to grow scarce, and some of the larger cities had begun to look hungrily at London. For ten years now it had been hiding from them, skulking in a damp, mountainous, western district which the Guild of Historians said once been the island of Britain. For ten years it had eaten nothing but tiny farming towns and static settlements in those wet hills. Now, at last, the Lord Mayor had decided that the time was right to take his city back over the land-bridge into the Great Hunting Ground.

Grab a copy and nick it off your children after they have read it - it's a classic. 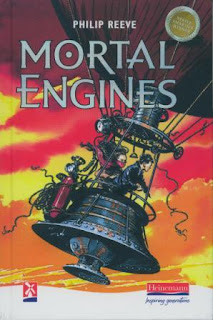 Ah - Enid Blyton! I'd forgotten about her. The Famous Five (and, was it, The Secret Seven?). I read a lot of her. Also The Hardy Boys - for a while I was addicted to them. Kind of scary how you can forget the things that once gave you so much pleasure, isn't it? I think I'll have to do some more research on this.

I love childrens books! I've read 6 of the ones you mention. The borrowers was a favorite of mine as a child. Phillip pullman's trilogy, Awesome!

I just finished this book called, "The tale of Despereauix being the story of a mouse, a princess, some soup, and a spool of thread." (yep, thats the whole title) By Kate DiCamillo. (270 pages) It's fairly new, 2003.
I'd recommend it.

I'll check out the one you recommend.

I used to read Enid too. I read the Mallory Towers ones every Saturday, started in the bookshop and read by the time we got home in the car.

I'm scratching me head about other ones - ooh, Anne of Green Gables, the entire series, Little House on the Prairie, msot of the series althought that was earlier. i actually bought Little House for my daughter to read. She turned her nose up at it. When I read through the first few pages I realised why. You def need to be a little younger than 10 to see the magic in them.

Ah, Enid, bless her, responsible for a whole generation who couldn't look a ginger beer bottle in the eye without muttering 'lashings'. Mallory Towers, St Clare's, The Famous Five, The Secret Seven, Mr Pinkwhistle and a whole bunch of lost stories that are far too politically incorrect for todays tastes.

Great post - so write Mortal Engines and the rest of the series is Brilliant. Try "Pirates Adventures with Scientists" and others, by a author with the second name Defoe. Genius, but cant find one right now!

You is thinking of The Pirates series, Mut, by Gideon Defoe.

A question. Got off talking to the Feckers about books and got on to cartoons that I liked when I was young. Topcat was a fav but I can only remember Benny, TC and Officer Dibble. What was the gingery one called?

Thank you for jogging my memory!

Enid Blyton - ah, lashings upon lashings of delicious little memories there...the Famous Five, Secret Seven, Josie, Click & Bun...I must admit to never having come across Mr Pinkwhistle but then my mother warned me about men like that, with all their whistles and such...
I adore Despireaux and would now love to get my hands on the Mortal Engine (who wouldn't?)
It's a gentle pleasure taking a break from my sordid adult tastes from time to time..

I think as adults we should dip into so-called children's fiction more often. yes, you're right Claire, not only a break from adult lit but also an deeper insight into a storyline that is not corrupted by emotional disaster.

You are right, of course, Minx. That is precisely why they are so attractive. One grows weary of emotional disaster and craves a good story that doesn't rely on it for impact.

Working with children has placed me in a position where knowledge of the literature on offer for younger readers is essential. It has also given me an insight into how a reader developes taste from an early age. Like music, I feel it is necessary to encourage children to explore all genres, never taking it for granted that they will automatically like everything that you like.
My own children have switched me on to some wonderful writers and they are extemly honest about my own writing!!

'The Water Babies' and another odd, enchanting story full of Victorian morality -'The Cuckoo Clock', by Mrs Molesworth,which I noticed is out in reprint with original illustrations.

Recently read Stig of the dump for the first time since I was eight.

Have read much Jaqueline Wilson.

Also, that series of books about the adventures of the young James Bond by that person whose name I can't remember.

Ohh some of those were my fav stories as a kid, excellant list!!!

Oh, oh, oh, Robinsheugh by ??? - the first kids book that made me want to write stories - I bought it again last year - an ex-library copy...!
My dad used to get these monthly books for me from the Children's Book Club - Ludo the Star Horse - lovely bought that again too!

Good list, Minx. Sadly I haven't kept any of my books from childhood. I remember how much I loved 'The Lion, The Witch and Wardrobe' though.

Did he? How revolting.

No, I definitely meant 'did he'?