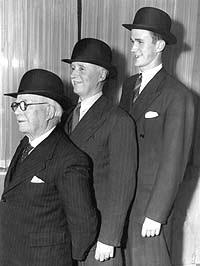 Don't get me wrong, I think a man looks great in a suit. Weddings, funerals and doing 'something in the city' are all places you would expect to see an abundance of the suited brigade, and very nice they look too. I do have a problem, however, with suits in the wrong place.
Last week I attended a meeting for promoting local services for children and was confronted by a whole flock of them who had flown down from the council headquarters. You could smell the Ralph Lauren (with undertones of testosterone) even before you got through the door.

The suits stuck together, drinking all the coffee and exchanging the latest buzz words. There were women suits as well - all identical in appearance and talking as much bollocks as the men.
I had to give a speech on my role in the local community and I could see one or two glances at being thrown at my appearance. I was wearing a suit, of sorts, it just involved purple and a certain amount of ribbon.
As lunch was served I overheard a few suits complaining about the quality of the free food and the fact that they had to attend another three of these meetings next week. Oh dear, what a shame. They should get down on their tailored knees and thank the Gods of Sharp Black Suits that they don't have to wear jeans and actually work for a living!
Writed by Unknown at 11:44 am

Sounds like a convention of undertakers!!I guess they were all Government Employees!

Ahem - about this picture. Why are those funny men all smiling like that, mummy? And why are they standing so CLOSE to each other?

Hmm, I drove past a convention scene the other day - lots of suits, men and women and I thought to myself in horrified tones, omg, I was one of those ones. I'll take purple and ribbons any day!
Psst, that lot in the picture looked remarkably stooge like - I'm sure if you look closely at your suited lot you'll find more than three of 'em!

I know what you mean Minx. I travelled with a first-class carriage load of suits two weeks ago. I got looks for my 'she-don't-belong-here' outfit and for what I took out of my untrendy tote-bag. A *gasp* book, instead of a lap-top!

I quite enjoyed it. One of the perks of having free travel courtesy of me hubby.

Yay Mutley, on the nose, and not a smidge of individuality between them.

Debi darling, those are 'suits' we don't mix with them, okay?

I'd definitely go with a pod of fuckwits. And believe me, I'm keeping well away.

A smarm of suits?

A prat of pinstripes?

A travesty of trousers?
A junkyard of jackets?

I thought I posted here last night - a snobbery of suits - but Blogger chewed me comments again!

I know, look how much time I have worsted.

No one else has cottoned on yet.