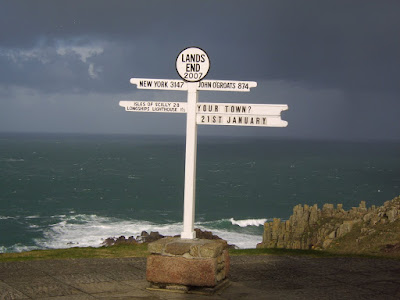 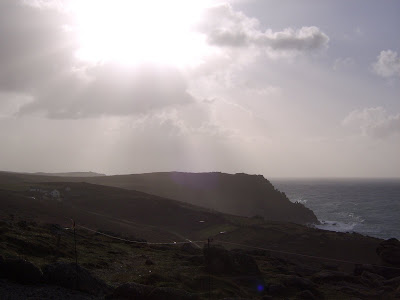 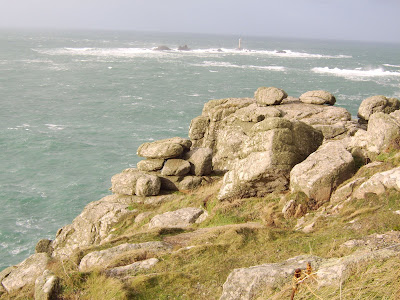 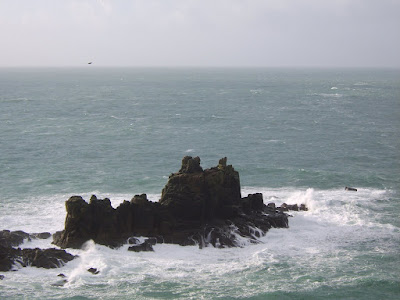 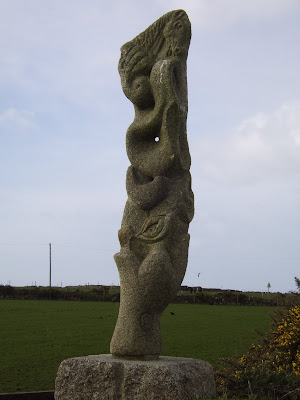 ....that can possibly summon up the beauty of the land.
Lands End - the end of our land, the tip of England. Here, where the Atlantic meets the Irish sea and the English Channel, lies the most dangerous piece of coastline in Britain. We stayed the night here, birthday treat, in the last hotel before you get to New York. With nothing to break it up, the wind blows relentlessly off the sea, battering this hotel since the early 1900's.
This romantically wild, desolate coast attracts thousands of visitors a year and a number of writers as well! Known as the 'wrecking coast' it is not hard to imagine the number of ships that have gone aground here. Unfortunately most met their end with a little help from the locals! Land pirates, who put out the warning beacons and reaped the rewards of rum, whiskey and anything else they could get their hands on.
Photos -
a) The Lands Ends signpost - have a photo taken for an extortionate price.
b) Greeb farm - over 200 years old and still going!
c)The Longships Lighthouse (one of about seven)
d) Wolf Rock
e) A modern (granite) carved way marker

These are beautiful pictures, Kate. Where were they taken? Otherworldly!

Put up an explanation now, Roberta.

I know the places well -*shudders* *relives terrifying memories* - by the way Roberta is crazy!

Dear MutleytheDog,
I am not crazy. Maybe a bit nutz, a little wild, a bit romantic, kind of exotic, but I am NOT crazy!

Beautiful pictures to say the least. Mother nature is awe inspiring at times.

Yes, it's quite picturesque, and a nice place to stay if you don't mind your arse getting sore from sitting on all those craggy things. Personally, I like it a little more lush, with green shoots and insects.

BTW, having Mutley call you crazy is a classic case of the pot calling the kettle black. A short while ago he suggested mating with a horse in the missionary position. Of course, he may have been joking. I sense that he's quite a wag.

Cornwall is full of craggy things GB, and all of them make your arse sore, should you be so stupid to sit down.

Yay Mutley, Roberta is a crazy chick from over the pond. She will no doubt think you are of the same ilk, being as you is fwightened of iddy biddy two hundred foot cliffs.

>>She will no doubt think you are of the same ilk, being as you is fwightened of iddy biddy two hundred foot cliffs. >>

Ha! I'm a woman from the Appalachian mountains. Those rocks are wonderful, but alas, they do not compair with where I live. The water scares me more!

Me too, Roberta, especially this kind of water which requires total respect. The currents here will take you straight down, and there ain't no bottom!!

Locely pictures with all those craggy rocks and crashing seas. I love the sea this time of year!

Nice birthday treat - good for you!

A picture speaks a thousand words.

Send name of hotel - sounds like it is a must-visit! Are the ghosts thrown in for free or are guests tossed in the sea? Just checking.

Holiday makers aren't allowed in until May, Debi, although you may get past security if you know a local!!

Atyllah, the hotel is called The Lands End Hotel. Built in 1902 it has a kind of faded grandeur about it. Not too hot on vegetarian food, but the location is more than enough to make up for it!
Great place for getting rid of those unwanted relatives!

Blogger is starved. It ate up the comment I left you yesterday. What I wanted to say was, the pictures are amazing. And I'm really glad that you were given such a special bithday treat. Makes you wish the 'big' birthdays came around more often.