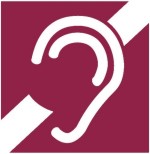 "Minx, this is Mrs Smith. She is going to be having Cathryn in her class after Christmas. She would like some background knowledge from her key worker.'
This happens frequently in the centre where I work. Many children have problems
or disabilities and we welcome a visit from staff before the child moves on to school.
"So, little Cathryn, she's deaf?" Mrs Smith asked.
"Yes, hearing impaired, a profound loss" I said.
"So she doesn't hear too well then?"
"Without her radio aids Cathryn would struggle to hear a plane six feet over her head.".
I went on to explain about the importance of light on the face when talking to Cathryn and the best place for her to sit in group work so that she can lip read. Mr Smith looked a bit confused but at this time she was more concerned with avoiding a flying paint pot from landing on her white skirt!
A little later Mrs Smith joined us for a circle time, watching Cathryn interact with her peers.
"She does well, doesn't she?" I said.
Cathryn had joined in with the activity to the best of her ability and understanding. She had only wandered off task a couple of times.
Mrs Smith looked a bit perplexed.
"I think it would do her good if she could learn listen a bit harder" she said.
So all you 'deaf' people out there, as Mrs Smith says, just learn to listen a bit harder. Maybe if you are sight impaired you could learn to look a bit harder and if you're stupid, well, go and join Mrs Smith in her class of imbeciles!! Thankfully Mrs Smith was also too dim to notice that I had signed something as she left the room!!
"Gow? Moo! Where gow?" said Cathryn.
That's my girl!
Writed by Unknown at 2:27 pm

As I was saying....Aaaaa! What's wrong with people? This is not a week in which I'm finding a lot to appreciate about humankind. I hope that the wee girl will stay with you, Minx, rather than moving on to Mrs. Clod's tender and ignorant mercies.

Er, what was that, Minx? Speak up a bit I can't hear you!

What a stupid woman.

Minx this really pissed me off.

But let me tell you an anectdote from my own son's disability.

He had a speach impediment in the second grade. He couldn't make the "r" sound. His brother taunted him unmercifully. To which my boy would say: "Leave me alone! You awn't the boss of me,you qweew!"

I spoke to the speach therapist at the school to make the appointment.

She asked me what exactly was the problem so I explained to her by giving her the example above.

Without missing a beat, she told me to teach him to say "fag".

What are you deaf or something Maxine? I said THERE ARE SOME STUPID PEOPLE IN THE WORLD!

Mrs Clod, I like that moniker Susan, I shall slip that one in the next time she visits. I will look up the sign for clod and teach it to Cathryn!!

How's the writing going Marie? The Slavedriver, formerly known as Skint, has let me off for good behaviour because we have just finished the last few tweaks!!
Yippee!!

Mrs. Smith is the deaf one.

Thought I'd pop in again since I left such a short comment last night.

Just wanted to say that this pissed me off too. I can't understand how some people can be so stupid. Why don't they think before opening their mouths to speak? Mrs Smith sounds awful.

Minx, this is not something I would normally discuss online, for various reasons, but I have a disability of my own. I have had my own personal experiences with the Mrs. Clods of the world.

The impact of such people is greater than it may seem, even to the knowledgeable and compassionate. The ramifications of their attitudes can spread far beyond what you might imagine. I'm sorry to be vague, but A: there are events and issues I'm not prepared to post online where just anyone may read them; B: there is not enough room for that detailed an explanation.

I have already said more than I am really comfortable exposing in such a way, but I consider what I am about to say important enough to override my hesitation.

I do understand that you only have so much control over the situation. I am not criticising you, or implying you are neglecting your duties in any way. But I hope you will understand when I ask, please, if there is any way at all you can manage to accomplish this, keep Cathryn away from that "teacher", who is likely to teach her all the wrong lessons.

I'm sorry if I have worded any of this in a way that offends you. I simply feel, as well as know, just how much harm such a person can do. I suspect, with a heavy heart, that if you could keep Cathryn out of the Wicked Witch of Witlessness' clutches, you would already have done so. Still, I had to say this. I hope you will understand.

Of course I understand WA. Every time I come across a situation like this I have a desperate urge to put the world to rights and give Mrs Clod the shake she deserves.
I work with a brilliant team, highly trained and highly insighful into the needs of young children. We try to put as much in place as we can while the child is with us.When a child starts at school we send a detailed report and hopefully some face to face advice. But no, we cannot choose a child's school for them, nor pick the right teacher for them, that is the parents job, and rightly so. I could share with you here my thoughts on the goverment policy of 'total integration' but that would probably be a book.
I learnt a long time ago that I cannot take my work home with me. I have to satisfy myself that while these children are our care them we do the best we can. It is not perfect and never will be, but we believe that we can lay the foundations that will give them the tools to cope with the Mrs Fuckwit-Clods in this life.

Thanks WA for sharing your thoughts. Knowledge is all, spread the word!

I echo WA's concern but understand the situation you are in, Dear Minx.

Where are Cathryn's parents? Is there a way you can perhaps put them wise? They may be clueless as well.

We have no power here Roberta. The school has been deemed appropriate for her and there she will go. If she doesn't go to this particular school then she will no doubt, somewhere along the line, meet the rest of the Mrs Clods who inhabit the teaching profession.
And the parents Roberta? Their choice lay in the fact that the school is the nearest one to them, they have another five children attending and they don't drive.

Children are as important to me as they are to you.

I hope with your influence, she'll learn to find the ignorant cows in this life and live happily!