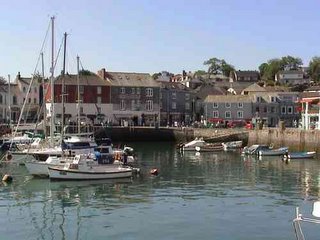 I was here today, in Padstow, meeting up with my lovely sister. She lives in Devon, about two hours away, and we try to meet as often as we can, which isn't as often as either of us would like. She is staying in Padstow for a couple of days with her husband. She had bought him a cooking course for his birthday, at the Rick Stein resturant (a famous fishy chef), so we took advantage of this and spent the day drinking coffee on the quay, and catching up.

My sister means a lot to me, we are the only members of our family left, apart from a distant aunt and three long lost cousins who fail miserably in the communication department. We have been orphans for six years and are now very close, but this wasn't always the case.

She started it, by telling Mum and Dad to take me back three days after I was adopted. How rude can you get, I was only six weeks old - I made her pay for it for quite some time!

I regularly stole her platforms and wore them to school, and nicked her lipsticks that house rules stated I was too young to use. I dobbed her in when I could and locked the door when she was late in, forcing her to try and climb in my bedroom window. She, in turn, pushed me out of the apple tree when I was seven and gave me an arm that resembled a hammock. I told the nurses that she had hit me with a hammer! She also gave me a black eye with a wooden spoon, but I got her back by putting slow worms in her new patent leather boots.

She left me in a dark lane once, with a bat stuck in my hair (we laughed about that one today) and she also released my prized collection of caterpillars that I had hidden under my bed in a shoe box. I scratched her Donny Osmond records with Dad's pen knife and pushed a plastic spoon into the un-cooked macaroni cheese that she had made at school - it turned orange.

Later, when she got married we found that we actually had quite a lot in common and as I caught up in maturity our childhood spats became less and less. We became inseperable when our parents were diagnosed with cancer within months of each other. Any remnants of our past squabbles disappeared as we fought health authorities and hospitals to give our parents the best care we could.

We have been orphans for six years now, and never has there been two sisters as close. We speak on the phone at least once a week and exchange emails every other day - all good sisterly stuff.

Today she told me I looked like a twat in my new stetson and I flicked coffee over her new white top - some things never change!!

I'm sending a link for this to my own sister!

I've always wondered what it would be like to have a sister. I've only got one brother and he and I are very close so I really miss him as he lives in Sweden.

Love the photo, by the way!

Our brothers and sisters becaome more important to us as we get older - stay in touch!