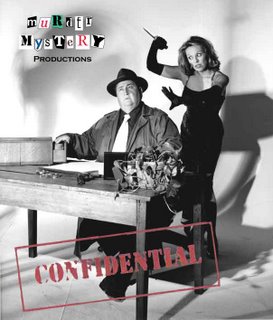 I have been wandering around for an hour, picking up the empties and the odd wig, trying to figure out why I feel like I've been kicked by a small and vicious donkey. It was only when the MD showed me last night's photographic evidence that I realised that I have probably broken ribs from laughing so much!

The Gin Gang and the Beerpigs did themselves proud and as usual threw themselves into the 'spirit' of the night. We had wine labels for Scarfazi Vineyards replacing the originals

and a priest with who could blaspheme in latin - his holy water turned out to be gin (wayhay!!).

The outfits were extreme, supreme and in the case of the thinly moustached MD just a little too realistic for words. YUM!

Dementia, who was playing a psychic, had trouble with her accent and returned to her thick Brummie roots whilst Demoana, who had managed to put her wig on backwards, spent the evening running to the tv to keep us up to date on Eurovision (we had a sweepstake going on the worst song).

By 2am no one gave a shit who had murdered who and we ate the last of the chocolatey (couldn't call it Tiramisu because Demanda had forgotten the alcohol) pudding and the MD and I sent them off in taxi's after they had woken up all the neighbours signing Sinatra songs.

We are now thinking of booking into a proper Murder Mystery weekend and inflicting ourselves on the public at large - anybody done one?

PS I didn't do it - it was that rat, oops, can't say in case you ever do this one

it's a role playing one - can be expensive, but it was good when we did it.

Thanks, I'm looking it up!